The day is here, AOSP fans: you can go pick up a gloriously stock Samsung Galaxy S4 or HTC One in the Google Play Store now. The "Google Play Edition" phones went live this morning, right on time, and are now for sale next to the Nexus phones and tablets. The GS4 Google Edition can be had for $649, while the HTC One goes for slightly less at $599. Both are running the latest version of Android 4.2 shod of all skins and add-ons, with promised updates via Google itself. At the moment, the phones are only available to United States residents. 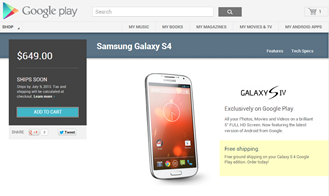 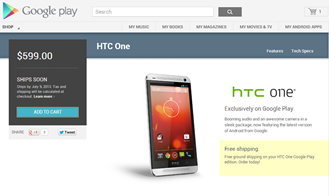 Both are shipping out on July 9th, with free shipping as a nice bonus. Which one to get? You've probably already decided this for yourself, but here's a quick comparison of specs just in case you haven't. Both phones pack a gorgeous 1080p display: the GS4 uses a 5-inch Super AMOLED panel that's a bit brighter, but with color saturation that some don't appreciate, while the One has a slightly smaller 4.7-inch Super LCD that's a bit easier to read under direct sunlight. The HTC One wins for pure storage with a generous 32GB of space, but the GS4 gets 16GB of storage plus a MicroSD card slot. Keep in mind that Google Play Store content (apps, movies, and music) can only be placed on internal storage on a non-rooted phone. 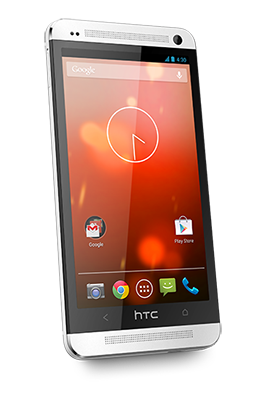 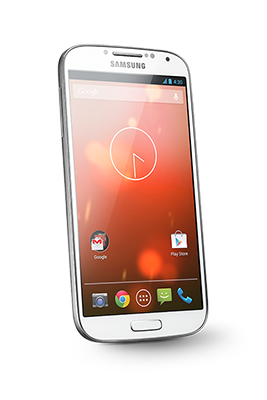 Both phones are powered by the quad-core Snapdragon 600 chipset, but the GS4 is clocked slightly higher at 1.9Ghz to the One's 1.7Ghz. It won't make a huge difference for everyday operation, but speed demons will probably lean towards the GS4. Samsung's phone also has a bigger battery at 2600mAh versus the One's 2300mAh, with the added bonus of being removable and replaceable. Cameras are hard to compare on the two, since HTC uses a proprietary 4-"ultrapixel" sensor while the GS4 has a conventional 13.1MP rear shooter. Check our reviews of the Galaxy S4 and HTC One for some comparison shots, and keep in mind that you'll be shooting photos and videos with Android's stock camera. Both phones feature 3G and LTE bands that will work with AT&T or T-Mobile, and of course, the bootloader is easily unlockable for development or ROM tinkering. 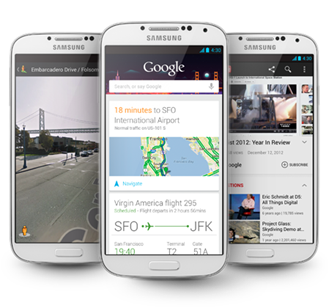 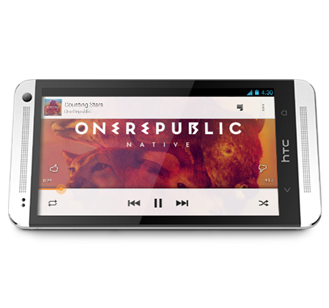 But let's be honest here: both phones are pretty amazing, and either would serve and discerning gadget hound well. The biggest difference, and likely to be the deciding factor for many, is the design philosophy behind them. Samsung's is more conventional, with a plastic build that focuses on the screen above all else, while HTC goes for a more sturdy aluminum unibody build. Those who consider loudness and audio fidelity will probably lean towards the One with its front-facing stereo speakers, while those who want a lighter feel in the hand will go for the GS4. The One wins on pure price, but if you're spending six hundred bucks on an unlocked phone, I doubt you'll balk at $650. At the moment, the One is available only in silver, and the GS4 comes clad all in white - these are likely to remain the only color options.

And since you've made it this far, I'll point out that the Nexus 4 is still available at a much cheaper $299/$349 for 8GB and 16GB models. You lose the amazing screen, screaming performance, and access to LTE, but it's still a pretty great device considering the price.

The Google Edition Galaxy S4 and HTC One are likely to sell out very quickly. If you want one, run, don't walk to the Play Store.