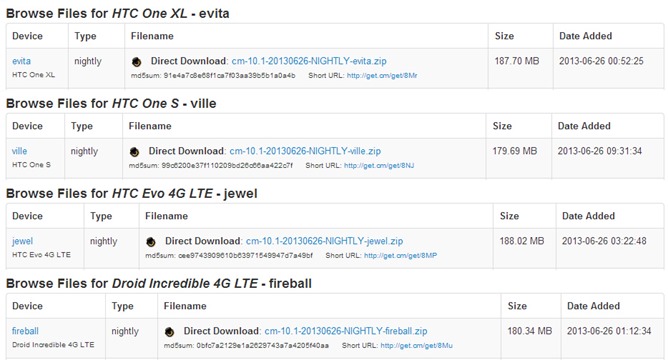 There's been no explanation for the 3-month gap in ROMs for these phones, all of which were based on the similar hardware found in the HTC One X LTE version and the One S. But in any case, they're back now, and should start getting regular updates like most of the other 10.1/Jelly Bean 4.2 devices. The usual warnings about nightly builds apply: they're probably OK at this point, but steer clear and wait for a release candidate if you want a more polished experience. If you're ready to flash, here's the link to CyanogenMod's Gapps.

Update: According to Brad Linder over at Liliputing, the three-month gap for some HTC ROMs was due to a DMCA takedown notice for the kernel. Now that the ROMs are based on a new version 3.4 kernel, the notice is irrelevant, and the ROMs are officially supported again.

If you were already running a custom ROM on any of the above phones, you'll need to do some extensive modding to get ready for the new builds, including re-locking and unlocking the bootloader once more. Check Liliputing for the details.