Believe it or don't, there were smartwatches before the Pebble and its host of contemporaries. While it's debatable that Sony's second-gen watch was the best of them, it was certainly among the most high-profile watches, and the company has returned to its old stomping grounds now that the segment has exploded. The SmartWatch 2 (stylized "SW2") includes a bigger, denser display, a revised software suite that more naturally mimics Sony's Android phones, and embedded NFC. The SmartWatch 2 will be available in September for an undisclosed price. 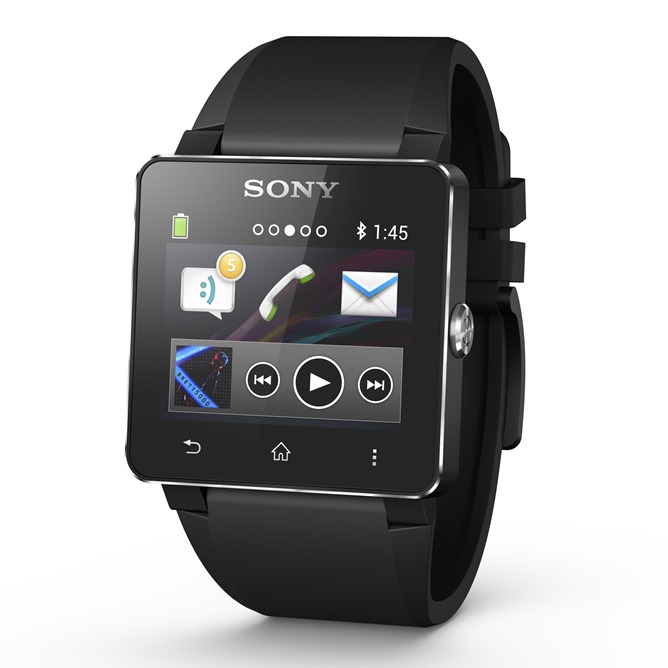 The hardware itself looks like a tiny Xperia phone, right down to the Android-style capacitive navigation buttons and the side-mounted power control (right where the winder on a real watch goes - nice touch). It's wrapped in a flat, rounded aluminum housing, with standard lugs compatible with any 24mm band. Sony will be selling their own, naturally, but you're more than capable of throwing a NATO strap on there if you like.

The screen has been stretched to 1.6 inches diagonally with a resolution of 220x176, compared to the 1.3-inch 128x128 panel on the original. It's a Transflective LCD, which should have better sunlight readability than the original OLED. Unlike most e-ink and similar watches, it's a full touchscreen, which Sony claims will get the best battery life of any smartwatch, 3-4 days with typical usage. Oh - and it can be recharged via a standard MicroUSB port, no special dock or cable required. The watch is rated IP 57 waterproof, what is sometimes known as "splashproof" - OK for quick soaks, but not sustained submersion. 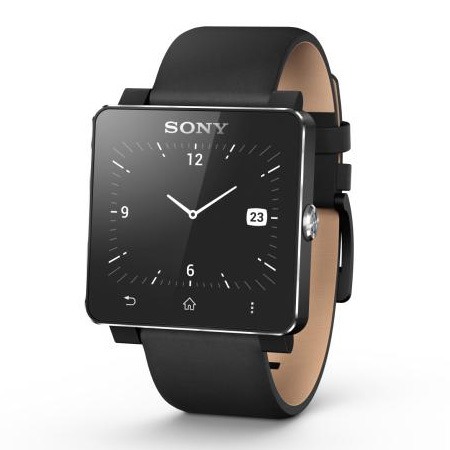 The inclusion of NFC is a big deal. Sony is hoping that you'll pair your SW2 with a phone (preferably an Xperia, of course) via an NFC tap. The company has used similar features on Bluetooth headsets and headphones. The software will be compatible with "most Android phones." Built-in apps include call answering and rejecting, a call log and missed call notification, text, email, Facebook, Twitter, Calendar, and weather alerts, a news aggregator, and a remote music player. The coolest software feature mentioned is definitely the remote shutter - tap a button on your watch and your phone will take a snapshot. Naturally, new apps can be downloaded and transferred over the Bluetooth connection. Sony claims they have 200 apps available at present, including the popular Runtastic.

While we won't know the price for a while, I'd be surprised if the SmartWatch 2 exceeds $250 retail. Advanced features or no, Sony will have to compete with the current crop of black-and-white smartwatches, which generally aim for $150 retail (if you can get one). Sony did not say whether on not the SmartWatch 2 would get the software unlock treatment, like its older brother.

App expandability is key to Sony SmartWatch 2. It can be personalised with more dedicated apps than any other smartwatch* to seamlessly suit your needs, whether you are on the go, keeping active, in business meetings or simply at home. Download a host of SmartWatch apps and experience a range of unique functions - many of which can even be enjoyed without ever needing to reach for your phone:

SmartWatch 2 is also both sleek and reassuringly robust thanks to its water and dust resistant design, giving you the freedom to enjoy it on the beach or simply on the go – come rain or shine.

The best of Sony in a SmartWatch

If you use Android, on either smartphone or tablet, Sony SmartWatch 2 is your ideal smartwatch partner. It’s easy and convenient to access notifications from your wrist such as messages, calls, email, Facebook™/Twitter™, Calendar, or use it as a remote for your Walkman™ or other digital media player. This wireless accessory is ideal for pairing with large-screen devices, such as the newly announced Xperia™ Z Ultra, in situations which call for discrete usage. SmartWatch 2 introduces new features as a natural successor to the current Sony SmartWatch such as NFC connectivity for one-touch pairing, stunning premium design and a range of technologies including higher resolution for sharper viewing, better visibility even in sunlight, longer battery stamina, more intuitive interface, standalone watch functionality and a wide range of pre-installed and recommended apps.

When not connected to your phone, SmartWatch 2 works as a standalone digital watch. Read previously received notifications, access the time, set your alarm or even use as a light when searching for your keys. SmartWatch 2 can also be personalised with any standard 24mm wristband and new Sony watchstraps will soon be available for further expression of your personal style.