When the flagship Xperia Z launched with Android 4.1, Sony promised that an update to the latest version was coming. Now they're making good: XperiaGuide reports that the Jelly Bean 4.2.2 rollout started yesterday, for at least some users of generic phones (C6603) in Spain and Hong Kong. The updated software needs to be flashed via Sony's PC Companion software. The new build is labeled 10.3.A.0.423, exactly the same as the update that started for the Xperia ZL four days earlier. XperiaBlog says that carrier-customized versions have also landed in Austria, the Czech Republic, and the Netherlands,along with an update for the generic Taiwanese model (C6603). 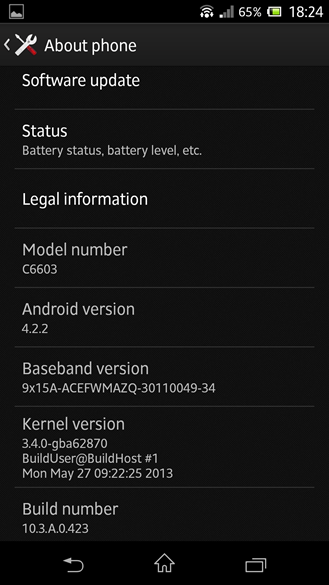 A changelog for the 4.2.2 release states that in addition to the updated software, Sony has pushed newer versions of its media apps, thrown in a remote phone location app, a new Functionalities widget, and support for MicroSD cards up to 64GB. Most interesting is this tidbit: "New Customizable navigation bar with quick settings." I don't have an Xperia Z handy, so I'm wondering if that's referring to the standard Jelly Bean 4.2 pull-down settings menu, or user-accessible settings for the soft navigation bar itself. Anyone who's rocking the new update, feel free to leave some info in the comments.

Software downloads and a guide for manually installing the 10.3.A.0.423 update for the Xperia Z are posted on XperiaGuide - you'll need a Windows computer to finish the process. Those who have unlocked their bootloaders can flash right along with everyone else. If Sony follows its usual pattern, the Xperia Z 4.2 update should start rolling out to all unlocked phones within the next week or so. Here's hoping that T-Mobile's upcoming version includes the 4.2 update at launch.