Few people probably saw this one coming. Microsoft Windows has long faced off with Mac OS X on the desktop, and while only a distinct minority adopted Apple's platform, the conflict has captured the interest of the tech industry for years. Open source advocates have even entertained the idea that Linux desktops would one day topple Microsoft's empire. Far fewer people speculated that it would be a mobile operating system that would start to replace Windows on desktop machines. Yet we've already seen Acer move in this direction, and now HP is doing the same. Today HP announced the Slate 21 AIO, a 21.5-inch tablet that wants to sit not on your lap, but on your desk. 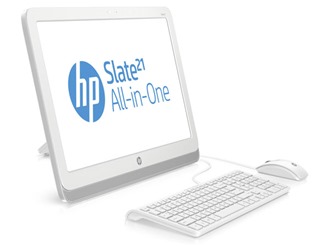 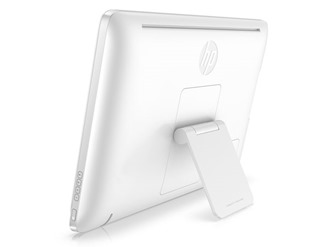 The HP Slate 21 sports a kickstand in the back that will position your tablet at the same angle as your aging all-in-one desktop PC, but it can be repositioned to various other angles that may be more finger or stylus friendly. Judging by the provided images, multiple USB ports in the back can handle your keyboards and mice, though I would imagine Bluetooth hardware will be supported as well. The computer - erm, tablet - will ship with a Nvidia Tegra 4 processor and run Android 4.2.2.

The Android interface has no problem scaling to larger screen sizes, but the vast majority of apps look atrocious when stretched too far away from their native mobile dimensions. Nevertheless, an Android desktop may be a good fit for a generation of people raised using smartphones and tablets, not heavy desktop interfaces, to do the bulk of their computing. It could also be just the ticket for the leagues of people who never quite grasped the complexities of Windows but still want to search the interweb, browse the YouTubes, and send tweets just like everyone else.

The HP Slate21 All-in-One expands upon HP’s portfolio of multi-OS products and is ideal for family activities, providing easy access to entertainment and productivity features, plus fun Android apps. Through Google Services, customers can reach shared content such as calendars, email, notes and documents, which can be created with the built-in productivity apps; users can also print wirelessly from anywhere in the house (1), organize content, and connect to other devices.

“Customers are looking for technology that simplifies their lives while keeping them connected to the entertainment they enjoy and the content they need,” said Jun Kim, vice president and general manager, PC Displays and Accessories, HP. “The HP Slate21 allows families to easily access content through the cloud and enjoy it together on a large, interactive screen.”

To further enhance productivity and entertainment, the Slate21 All-in-One offers a 21.5-inch Full HD (2) diagonal reclining IPS touchscreen with wide-viewing angles for vivid graphics and better shared viewing. With dual-band technology, users can stream music or movies and browse the web (3) at the same time, and built-in DTS Sound technology offers a rich concert-like experience. It comes pre-installed with an HP TrueVision HD Webcam and Wireless Direct (4) which enables users to share videos, photos and data between devices without the need for a network connection, and multi-user support with the latest Android OS Jelly Bean 4.2. Additionally, it offers speed and performance with a powerful Tegra 4 quad-core NVIDIA processor, as well as an intuitive optical touchscreen with true pinch and zoom functionality.

Kreyos Meteor Is A Removable Smartwatch With A Speakerphone, Indiegogo Flexible Funding ...