So I was sitting around this weekend using Gmail, Google+, and Google Drive thinking, "Gee, I wish there was a way I could give Google even more information about me." It turns out, there soon will be. The mad scientists at Mountain View are currently preparing a new service entitled Google Mine that is totally not a private sector arm of PRISM. It allows users to share their belongings with friends in their Google+ circles, letting people see both what others own and what they want. Sounds innocent enough, right? 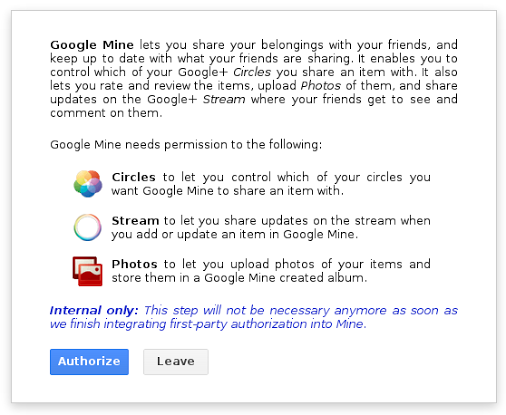 Similar functionality can already be found in services such as Springpad and Evernote, but they lack the degree of integration with a social network that Google Mine intends to offer. Friends won't have to sign up for a new service to see each other's items, they can just use the Google accounts that they already have.

There's also an Android app in the works. It's currently only available on Bazaar, Google's internal Play Store, but that is expected to change eventually. It will then immediately get 10,000,000+ downloads, because while Android fans can't agree over whether phones should be made of plastic or if TouchWiz truly is awful, we all collectively love giving Google more information than one company should ever have. I mean, who doesn't appreciate a company transparent enough to put their secret intentions directly in the name of a product?

Edit: It should be noted that this is still an internal project, and these things don't always see the light of day. If Google Mine never comes to fruition, don't be too disappointed.

[OH YEAAAAAH] There Is Now A Kool-Aid Man Photobomb App, Because That's Obviously What You've ...