Twitter is an awesome social discovery tool, but its implementation is fairly static. Even whiz-bang Twitter clients like the unfortunate Falcon Pro still present tweets in ye olde vertical column layout. Twheel (stylized "twheel") aims to bring a more innovative approach to Twitter. Tweets are presented in a wheel (natch) with 30 visible at any given time. Color-coordinated tags and bars let you see which ones are getting the most attention on Twitter, and sliding your finger around lets you highlight individual tweets to read them at the top of the screen. 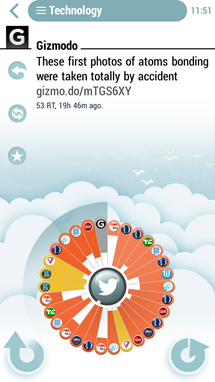 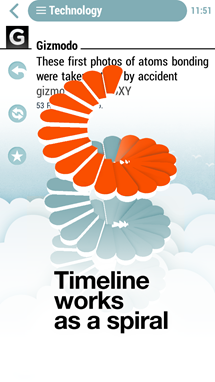 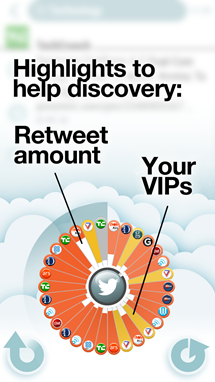 Navigating through your stream's history is a bit odd. The tweets are visualized in a circle, but you need to imagine them as a spiral - spin your finger clockwise to go forward in time, counter-clockwise to go back. Individual tweets can be retweeted, replied to, or favorited when highlighted, and writing a new tweet is accomplished via tapping the Twitter icon that serves as the wheel's hub. Swipe the tweet display area to the right to see statistics about that particular tweet and user.

It's a novel way to approach things, certainly, though I'm not sure it's actually better than the old column layout. A lack of customization options and no widget means that the app isn't a viable option to replace Plume (at least for me), and the interface alone isn't enough to keep me coming back. Twheel is also a bit pricey for a one-trick pony at $2.99, but at least it seems to be compatible with everything.