NEC's first entry into the American Android market isn't exactly auspicious, but it does fill a much-neglected niche. AT&T is now offering the NEC Terrain for sale, right on time and online only. $99.99 on contract gets you the QWERY candybar phone with a miniscule 3.1" screen, or you can shell out $429.99 to own it outright. Considering its ruggedized, semi-waterproof build, that's not such a bad deal... but you will have to live with Ice Cream Sandwich, a year after Jelly Bean 4.1 was released. Ouch. 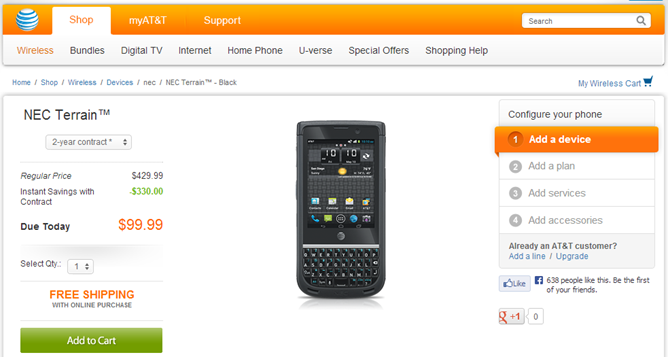 That small screen hides some pretty respectable specifications: the NEC Terrain is powered by a Snapdragon S4 dual-core processor clocked at 1.5Ghz, with a full gig of RAM to back it up. 8GB of storage can be paired to a MicroSD card. The screen is surprisingly dense for its size at 640x480 - not so long ago, anything in this range would be expected to get a 320x240 resolution. It's also protected by Gorilla Glass, and with the small display, the 1900mAh removable battery should last for a good while. The phone includes access to AT&T's LTE bands. a 5MP rear camera, .3MP front-facing cam, front-facing speakers, and backlit keys round out the hardware.

I'm sure this little guy is just perfect for someone, but those who want a bigger screen or better specs might want to splurge on the upcoming Galaxy S4 Active. It's got the same limited waterproof and dustproof spec as the Terrain, plus a 5-inch 1080p screen and Android 4.2, all for $200 on-contract. But if you need that physical keyboard and don't mind the smaller build, go for it. Shipping for the Terrain is free.