Samsung is busy showing off its three Galaxy S4 variants and incredibly ugly glasses onstage in London, but one of the biggest announcements of the day was almost glossed over in the introduction of the premiere event: the much-rumored Galaxy NX. This Android-powered version of Samsung's dSLR and Micro 4/3 camera competitor is aiming to bring Android integration to the higher end of the consumer camera market. While Samsung is still talking it up at the event, at least one random YouTube user has managed to do a full video review of the device. 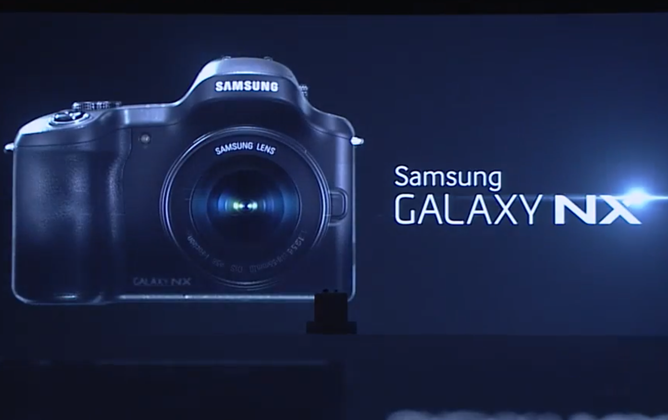 The Galaxy NX is exactly what it sounds like: a mix of the software features of the Galaxy Camera and the hardware of the Samsung NX series. The camera is laid out like a smaller version of a digital SLR (though there is no reflecting camera) and includes a physical electronic viewfinder, which is something that has not been a given for the smaller 4/3 cameras. The star of the show is the camera's proprietary lens mount, which accommodates all of the interchangeable lenses already available for the NX series, which range from a new 10mm F3.5 fisheye lens all the way to an 18-200mm telephoto. It all leads up to a 20.3 megapixel sensor.

On the back you get a 4.8-inch 720p LCD display which serves as the primary means of adjusting photo and video settings, along with general navigation and editing. In the "expert mode" (which camera buffs would consider the equivalent of the manual mode on a dSLR) you can adjust all the primary settings like shutter speed, F-stop, and ISO, in a sliding interface meant to mimic more traditional cameras. Less experienced shooters get access to over 30 "smart" modes, plus all the standard bells and whistles from Samsung's expanded Android camera app. A physical shutter button, pop-up flash zoom, and video recording button, and a multi-function wheel are the only physical controls - the shutter button launches the camera app from anywhere in the interface.

Underneath the hood is a 1.6Ghz Exynos quad-core processor and 1.5GB of RAM (2GB in some regions), with a separate image processor dedicated to the sensor. The Galaxy NX is capable of shooting shutter speeds of up to 1/6000 of a second, with a maximum ISO of 25,600, and it includes hybrid autofocus. The battery is an interchangeable 4360mAh model, and removable storage is limited to MicroSD. The camera has a rather disappointing 16GB of on-board storage, much of which will be taken up by the Samsung's Android build. Ports include HDMI out, an external microphone port, and MicroUSB for charging and connection. There's also a hotshoe for larger flashes and other accessories. Check out the video below for an in-depth look at the device.

Samsung neglected to mention a price or date for the Galaxy NX, but signs point to "high" and "soon." For the purposes of comparison, the closest current NX camera (the NX20) has an MSRP of $1100, though street prices are considerably lower. The cheapest NX camera, the NX 1000, goes for $325. There will be a 4G LTE version of the Galaxy NX, and almost certainly a WiFi version as well.

LONDON, UK - June 20, 2013 - Samsung Electronics Co., Ltd. today announced the launch of the GALAXY NX, the first 3G/4G LTE Connected Compact System Camera (CSC). Versatile and easy to use, the GALAXY NX combines cutting edge optical performance with connectivity capabilities and galaxy of applications based on Android eco-system, all in one stylish package. The result is a new type of connected device which allows users to turn their experiences into a story that can be instantly shared with anyone they choose, from wherever they might be, in amazing color and outstanding detail.

"The GALAXY NX reflects the unique needs of a user who needs to take professional photos and share them immediately in any situation. For those who want to express themselves and the exciting moments that make up their lives quickly, easily and on the go, the GALAXY NX is an ideal choice" said Myoung Sup Han, Senior Vice President and Head of the Digital Imaging Business, Samsung Electronics.

With the 3G/4G LTE technology, the GALAXY NX allows photographers to stay constantly connected with their world. Promising speedy sharing whether on the move or right at home, the GALAXY NXs' seamless connectivity transcends the current offering to photographers, providing a device which puts the sharing of professional level images at its heart. The GALAXY NX embraces the era of visual communication to provide an outlet for passionate photographers to express their exciting experiences immediately, in spectacular quality.

The GALAXY NX is equipped to help you capture the scene and mood of every hotspot you visit.Photo Suggest provides location based recommendations of popular photography spots, sourced from a huge library of images taken by fellow photographers across the world. Story Album lets users enjoy timeless memories by displaying special moments on one timeline, reframing and resizing them to create digital photo books which can be viewed and shared on other devices.

Superior image quality is available whenever and wherever with the GALAXY NX and array of interchangeable lenses. The 20.3MP APS-C Sensor produces images which are bright and detailed, even in low light conditions, while the DRIMe IV Image Signal Processer delivers the speed and accuracy which today's photographers demand.

Life moves fast and the GALAXY NX makes sure that you don't miss a moment. Its Advanced Hybrid Auto Focus (AF) System ensures accurate phase and contrast detection for crisp, vibrant shots, while the 1/6000 sec shutter speed and 8.6fps shooting lets you capture the action as it’s happening.

The flexibility offered by the GALAXY NX’s selection of Interchangeable Lenses places creative control firmly in the hands of the photographer, opening up a world of imaging possibilities, whatever the scenario. From compact pancake lenses and an ultra-wide fisheye to exquisite longer prime and zoom lenses, the extensive range of lenses help change users perspective on their world to create images which are truly special and help them to tell their story in a new way. True 3D Creator also brings an added element of realism to the GALAXY NX results, allowing users to shoot images and movies in 3D with Samsung's 45mm 2D/3D lens.

Simple and easy to use

With Android 4.2 Jelly Bean, the functionality of a smartphone is utilized to improve the photographic experience. Users can choose from an entire universe of Android apps to help personalize their GALAXY NX and do more than just shoot amazing photographs and video, from editing images to adding special effects to staying in touch with friends and family.

The GALAXY NX is packed with features which help photographers to take images that embody their passions and express their unique outlook on the scenes they are shooting. More than 30Smart Mode lets users choose the optimum settings for the environment they are capturing, as well as create fresh, artistic images. ‘Multi Exposure’ merges two different shots together to produce one distinctive image, while ‘Animated Photo’ connects continuous shots of up to five seconds, creating a moving GIF file. For added realism, ‘Sound & Shot’ stores sound and voice together as the picture is taken, so moments are captured exactly as they happened.

For added personalization, Camera Studio allows users to easily customize settings with their most frequently used applications or camera modes, making sure their photos are captured exactly as desired every time.