NVIDIA doesn't want to take any chances with its first portable gaming product. After receiving feedback from prospective customers when the initial $349 price for SHIELD was revealed, the MSRP has been lowered to $299 - a big deal for cash-scrapped gamers and hardware junkies alike. Those who have already pre-ordered the hardware will be charged the new price (with whatever funding source they specified) when it ships. NVIDIA has also officially set next Thursday, June 27th as the launch date for SHIELD. 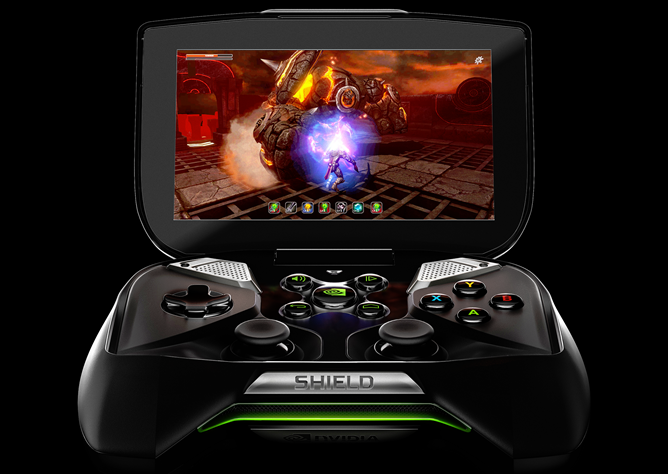 SHIELD was already surprisingly cheap, considering that it's the first device with NVIDIA's Tegra 4 processor and other top-of-the-line specifications. Cameron Summerson made an in-depth analysis of its value proposition at $349. At three c-notes, SHIELD is inching its way towards the midrange for high-end tablet buyers, and perhaps more importantly, it's just $50 above Sony's stand-alone PlayStation Vita portable gaming console. The cheapest Tegra 4 tablet we've seen yet is ASUS' updated Transformer Pad Infinity, at $399 with a launch expected in the third quarter.

With full-sized controls, the capability to run cheaper and/or more advanced games (even if they won't necessarily be available at launch), and access to a relatively stock build of Android, SHIELD should be tempting for traditional console gamers and die-hard Android fans alike. There's also the unique WiFi game streaming from GeForce-powered gaming PCs, but this feature will be launching in beta, and will only be available to those with a relatively recent NVIDIA graphics card.

Those who have already pre-ordered SHIELD don't need to do anything to take advantage of the lower price - your debit or credit card won't be charged until your hardware is shipped next week. Though NVIDIA hasn't explicitly said so, it's probable that SHIELD will be available at Gamestop stores on Thursday or soon after. You can also order SHIELD from Gamestop's web store, NewEgg, or Canada Computers.

Eden To Green Opens Up On The Play Store, Now Available To Tree-Huggers Everywhere