After an initial release in Canada, Zynga's latest attempt to addict millions of mobile gamers is now available to the greater Play Store. Eden to Green fits broadly in the tower defense genre, with a variety of flowers fighting off an army of invading machines. (So it's like Terminator meets The Happening.) The game is a free download, though device support seems a bit spotty: my ancient HTC Incredible shows as compatible, while my nearly-new Galaxy Note 8.0 does not. 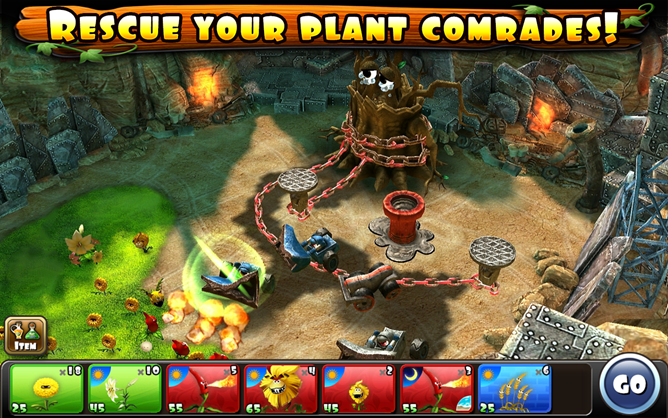 Eden to Green is most certainly not a riff on Plants vs. Zombies, despite having the player grow offensive flowers and vegetables to defeat an inhuman foe. It's actually closer to a real-time strategy game (although it's technically turn-based) with the grass growing around each new flower serving as a literal home turf. Graphics are quite impressive, thanks to the snappy Unreal 3 engine - this game might not play nice with older hardware.

As usual with games published by Zynga, Eden to Green utilizes a free-to-play model with currency, powerful upgrades, and other goodies available via in-app purchases. The developer is iNiS, previously responsible for Square's unique and expensive Demon's Score. Tegra devices will get a few extra effects and high-resolution textures. A network connection is required, because Zynga didn't think the standard IAP model was evil enough.