Welcome to the latest entry in our Bonus Round series, wherein we tell you all about the new Android games of the day that we couldn't get to during our regular news rounds. Consider this a quick update for the dedicated gamers who can't wait for our bi-weekly roundups, and don't want to wade through a whole day's worth of news just to get their pixelated fix. Today we've got another game book from Tin Man Games, a unique multiplayer puzzle game, an ingratiatingly cute platformer, a game that Pinky Floyd fans should love, and a Snake derivative with a soapbox and a message. Without further ado:

Tin Man Games has a small but dedicated following: old-school tabletop gamers who can't get enough of this developer's unique mix of traditional pen-and-paper RPGs and Choose Your Own Adventure-style storytelling. The latest entry in their RPG collection is Infinite Universe, a sci-fi affair set in a galaxy that's not far away at all at an indeterminate time. The story combines your typical rebels versus empire staging with some identity crisis and a bit of mystery. Infinite Universe is expensive, like all Tin Man games, but worth it for fans.

In the fourth millennium, the Mandellian Empire of the Tau Ceti system is at war with the rebel army known as DWORF. And lucky you have been chosen for a dangerous solo mission to kill or capture the rebel leader, through mind-bending loops of time and space. But wait a minute. Just who are you anyway? And how did you even get here? Such secrets you must uncover if you are to unlock your destiny… A newly written story by Brewin’, illustrated by Josh Wright. An all new sci-fi epic set within an all new universe! 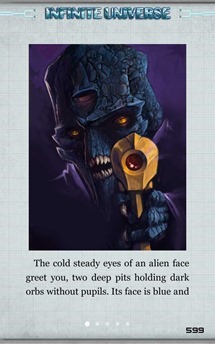 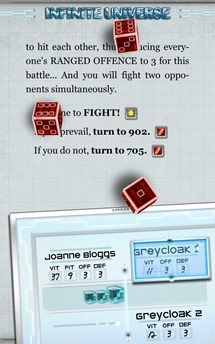 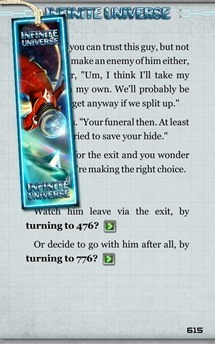 Bam fu is sort of a digital version of the old Hungry Hungry Hippos board game. Two, three, or four local players try to rapidly tap on a field of circles, switching them to their personal color. The person with the most circles when the time is up wins. The game's intention is to foster an atmosphere where the players are almost fighting in the real world - like Twister, with less groping and more punching. The 2D graphics are pretty good, and the design of the playing field itself is surprisingly functional.

HANDS CLASH IN CHAOS in Bam fu, a game for two-, three- or four people on one device. Everyone is fighting over the same pebbles. Physical contact is totally part of this game. Each player fights for her own color. Pebbles loop through the colors of the players when you tap them. Make the majority of the pebbles your color and win the round. Win five rounds and you’ve secured your victory. Be super quick. Block arms, push hands and squeeze fingers. Act like a kung-fu master. Protect your pebbles from being snatched. Play against slow people. (Works every time!) 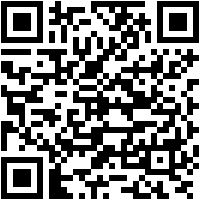 Fatty is like Kirby, plus a cynical attitude towards obesity. Your little girl character rides on Fatty, an amorphous blob whose only wish is to eat more and more junk food. Bounce, fly, roll, and defecate rainbows as you navigate through the levels, racking up Weight Watchers points like mad and avoiding healthy food at all costs.

Fatty is a simple little game about a stupid fat blob and his bouncing misadventures! Guide Fatty as he eats, crushes and bounds his way over countless hills and through countless obstacles. Be careful to avoid nasty healthy food, poison clouds and diet pill-wielding gym losers who want nothing more than to stop Fatty’s weight-gain. But Fatty cannot be stopped. Someone's been listening to too much Pink Floyd. In this monochromatic endless runner, your character flies across the dark side of the moon. The unique part is the zero G aspect: the runner can only gain forward momentum via his jetpack, collecting coins and avoiding obstacles. It's a lot like Jetpack Joyride, with a bigger playing field and more platforming elements.

Run, jump and take flight in this unique zero-g runner! Avoid falling into the abyss, and watch out for fuel-hungry UFOs, falling asteroids and shaky ground. The farther you run, the faster it goes. Collect power-ups to fly farther, and compete against your friends for the high score. Snake and oil land controversy: two great tastes that taste great together. I'll give the developer of Pipe Trouble points for originality and style, if not tact - both the file name and the screenshots for Pipe Trouble come from the iPad version of the game. The goal is to build an oil pipeline that mixes efficiency with safety. Build too close to fields or forests, and leaks or protestors could sink your entire project. But build around them, and your investors will get angry at the increased cost. Pixel art fans should get a kick out of the visuals.

PIPE TROUBLE takes a clever new spin on an old arcade classic and puts players in the middle of Big Oil & Gas. In this over-the-top satire you're tasked with building your own pipeline, and trying to balance the financial demands of using the least pipe to make the most money against the impact on the local environment and neighbouring farms.