Most Android phones have big batteries these days, but that doesn't mean they always have enough juice for today's go-go smartphone user. Luckily, ZeroLemon has just started selling gigantic batteries for the Samsung Galaxy S4 and LG Optimus G Pro. Sometimes form has to take a backseat to function.

The Galaxy S4 batteries are 7500mAh, which is almost three-times the capacity of the included li-ion cell. The Optimus G Pro unit is a whopping 9300mAh. That too is nearly exactly three-times the capacity of the device's standard battery. It almost goes without saying, but ZeroLemon does include new back covers to seal in these gigantic li-ion cells. 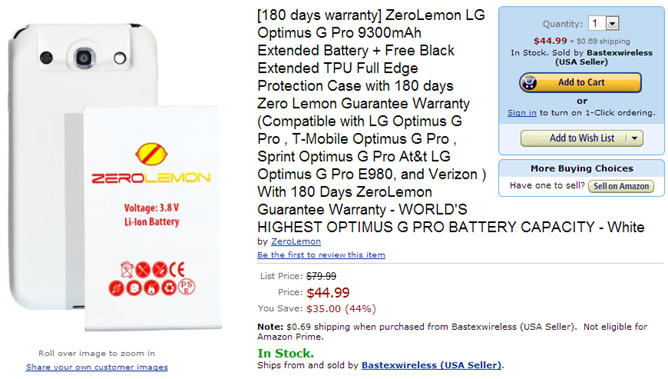 While they're going to make your sleek, sexy phone look a bit like a brick, the ZeroLemon batteries do come with black and white back cover options for both devices. The Galaxy S4 edition will run you $39.99, and the G Pro versions clock in a little higher at $44.99. If you can put up with the added girth, you're going to get tablet-sized battery life in your smartphone.