Ready to live life to the fullest, you jet-skiing, rock-climbing, skateboarding, heath food commercial stereotype? Then you need a phone that can take at least as many bumps and bruises as you can, and Samsung and AT&T are happy to oblige. The carrier-branded version of the ruggedized Galaxy S4 Active announced yesterday is now up for preorder on the AT&T website. It's being offered in Dive Blue and Urban Gray colors. The phone will launch online and at retail stores on Tuesday, June 18th. 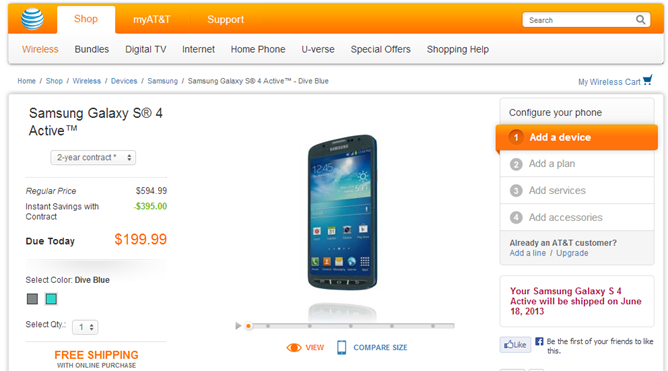 The S4 Active features most of the same specs as the regular S4, in a thicker, tougher package that's water-resistant at a depth of one meter for 30 minutes (IP67). The 5" screen is still a respectable 1080p resolution, though the panel itself is downgraded to TFT LCD, and since it's the LTE version, we're seeing the 1.9Ghz Snapdragon 600 CPU and 2GB of RAM rather than the 1.6GHz Exynos 5 Octa 5410.

The camera is downgraded to 8MP, though Samsung would like you to believe it's better at shooting underwater with the volume rocker serving as a dedicated camera button. The phone is a bit taller, wider, and thicker than the standard S4, with physical buttons instead of the capacitive control keys, and it keeps the removable battery and the MicroSD card slot. The S4 Active runs the same TouchWiz build of Android 4.2. At present, AT&T is only offering a 16GB model.

The price is $199.99 for a new contract signee, or $594.99 if you want it free and clear, both with free shipping. That's the same price as the standard Galaxy S4 on-contract, and ninety bucks cheaper without one - a nice bit of savings for anyone who's been looking for a nearly top-of-the-line model that can take a few punches. Considering the markedly lower specifications on the Galaxy S4 Mini and S4 Zoom, it's nice to see premium hardware offered in this way - we're sure quite a few of you who haven't been impressed with Samsung's thin, plastic design language as of late may be looking at the Galaxy S4 Active in a new light.

Unfortunately there's no indication that the S4 Active will be coming to other American carriers at the moment. The international unlocked version should be available soon.