We have all been anxiously awaiting news of a successor to the Nexus 7, which is now a year old. Google I/O came and went with no announcement, leaving everyone a bit deflated. Now some regulatory filings appear to offer the first peek at what Google and Asus have up theirs sleeves for a new Nexus 7. 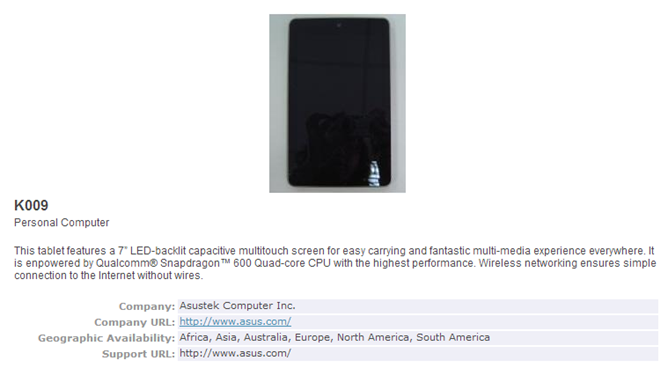 The Bluetooth SIG includes a small image of what is apparently the new Asus-made N7, but from the front it's just a generic black rectangle. The product description is interesting, though.

This tablet features a 7” LED-backlit capacitive multitouch screen for easy carrying and fantastic multi-media experience everywhere. It is enpowered by Qualcomm® Snapdragon™ 600 Quad-core CPU with the highest performance. Wireless networking ensures simple connection to the Internet without wires.

The Bluetooth filing lists K009 as the model number, which is the same identifier used in an FCC filing also floating around this morning. This has a little more data, but not all of it matches. We clearly see the Nexus branding used as a marketing name, so it's fairly certain this is not simply a random Asus tablet. Strangely, the FCC filing lists the APQ-8064 as the ARM variant in the device. That is a Snapdragon S4 Pro, not the 600 indicated by the Bluetooth SIG. It's not clear what this inconsistency could point to. Also in the FCC document we see both front and back cameras, a 4000mAh battery, and probably LTE support. 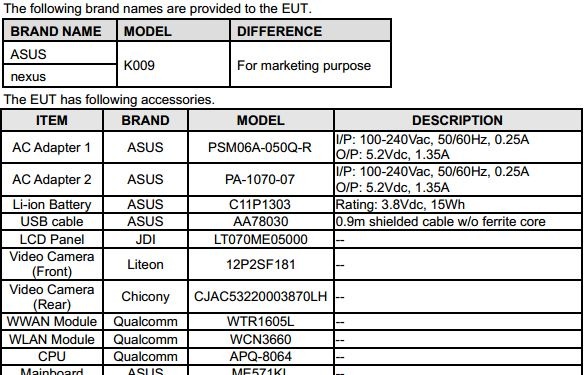