Samsung has a thing with cameras lately, it seems, and putting Android on them. Or attaching a phone to them. Eventually, I expect we will see the Samsung Galaxy Note 10.1 Camera, the world's first stylus tablet with a full-frame DSLR attached to the back. Until then, though, we may have to settle for the Galaxy NX - the spiritual successor to Samsung's not-exactly-lauded Galaxy Camera. Behold its [alleged] massiveness. 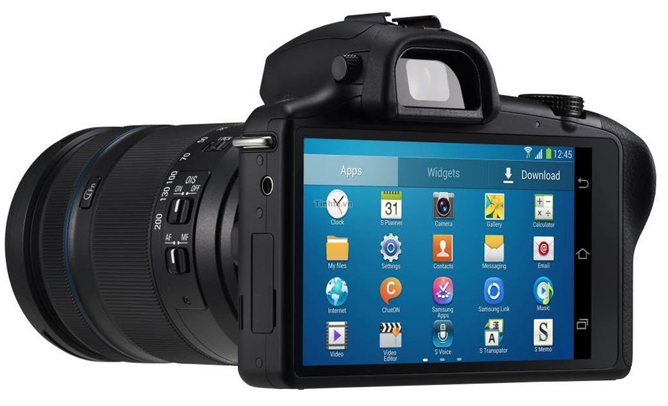 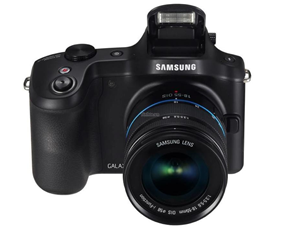 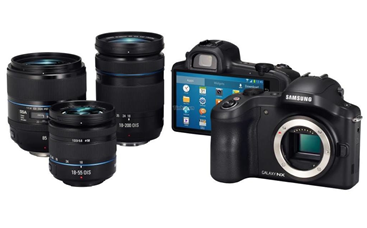 These photos were leaked on Vietnamese size Tienthe.vn, and they aren't without their faults. The screenshots appear to have been added a bit after-the-fact, and either may be the work of the images' publisher, or an unfinished draft of Samsung's press renders. The body of the camera, though, looks quite real. And as far as I can tell, there is no Samsung camera out there that matches up with this body - this is a new piece of hardware. The closest resemblance is the Samsung NX20, a not-so-compact mirrorless, with which the Galaxy NX does share a considerable amount of its design. That device, though, costs $1100.

Today's earlier rumor claimed this is a mirrorless camera, and at first blush, that almost looks not to be true. However, the lack of a mirror in the exposed sensor area in the third picture means we're almost definitely looking at a digital viewfinder that has been positioned to look like an optical viewfinder. Aesthetics, I guess? Samsung also doesn't make any high-end cameras with OVFs, so there's that, too.

Specifications remain basically rumors at this point, though a suggested 20.3MP APS-C sensor sounds plausible, as does Android 4.2.2. Speculation around screen size and processor have varied. We do know the NX has 18-55mm and 18-200mm lenses available, as well as a third lens whose focal length is not readily visible. They are presumably fitted for Samsung's NX mount.

Cost, however, will be this camera's biggest concern. The Galaxy Camera was greatly overpriced for the quality of images it provided, no doubt a result of its high-end smartphone processor and touchscreen arrangement (as well as a larger battery cell). Stuffing similarly complex components into a premium mirrorless camera may send the cost into the stratosphere.

More likely, the Galaxy NX's key components (sensor, lenses) are based on one of the cheaper NX-series cameras, like the NX1000, to keep the cost somewhere south of "egregious." If this actually does contain the pieces from Samsung's top-tier NX20, though, expect a wallet shock that will quickly put it out of your reach.

All in all, this camera just doesn't seem like a good idea. With the prosumer camera market shifting quickly into very compact mirrorless products from the likes of Sony, Pentax, and Fujifilm, Samsung's Galaxy NX feels like last week's casserole. Sure, a smarter camera is a great idea, but when you risk alienating most of your potential customers with pricing and a chunky form-factor, are a touchscreen and TouchWiz really worth it? For people who actually care about cameras, I'm guessing the answer is a resounding "no."

We'll know if these images are the real McCoy come June 20th, but my gut's definitely leaning the direction of "unfortunately, yes."