We know Blackberry isn't the most popular name around here, but it is a name that continues to pop up at some interesting times. Developers, in particular, may remember when the company - then known as RIM - launched Playbook OS 2.0 with the ability to run specially packaged apps developed for Android 2.3.3. Since that time, events and promotions have been run to encourage developers to bring their apps to the platform, but the aging requirement to target Gingerbread has become a burden. Despite rumors that the runtime would eventually be updated to support apps targeting Ice Cream Sandwich, there has been a growing belief that the Android runtime would be phased out, favoring applications written in C++, HTML 5, or Adobe AIR. As it turns out, the rumors were wrong, but only because support will now reach much further than previously expected. Today, Blackberry announced that version 10.2 of the OS will ship with support for Android 4.2.2. 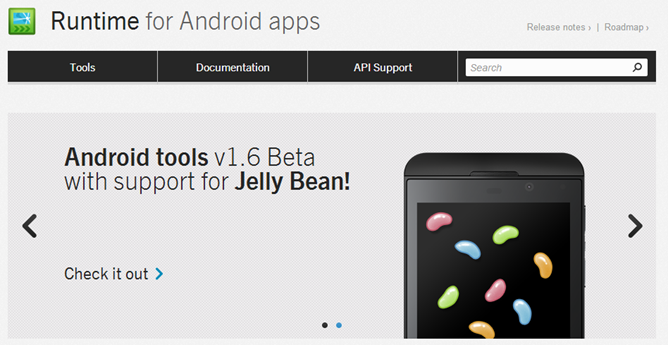 The leap from Gingerbread 2.3.3 (API Level 10) to Jelly Bean 4.2.2 (API Level 17) is obviously a huge upgrade which includes many new features like Fragments (and the new Nested Fragments), hardware acceleration, massively expanded animation capabilities, new controls and layout types, App Stack Navigation, and SO...MUCH...MORE. This is almost 2 years of Android evolution in a long overdue step. Unfortunately, there are still a few platform limitations, such as the lack of widgets, notifications as we know them (there is a custom alternative), and access to some hardware features.

Apps must still be converted to run on Blackberry's OS. For developers familiar with the process, not much has changed. New versions of the Eclipse plugin and SDK are available from the developer portal, along with 10.2 beta firmware for Dev Alpha B, Dev Alpha C, Z10, and Q10 devices. Unfortunately, simulator images are not yet available, but they should arrive later in the summer.

All things considered, it is a very smart move for Blackberry to keep the Android runtime reasonably up to date. BB 10 market share is still very low, but the user base is hungry for quality apps. Naturally, developers don't want to risk time and resources on a platform that may fail or simply doesn't have enough customers to justify the expense of new development. Thanks to this compatibility layer, relatively little time or trouble is necessary to expand to a slightly larger audience with money to burn. The Android ecosystem also benefits, as this only adds to the list of devices that can take advantage of the latest APIs. So, good on Blackberry for updating to the latest Android runtime, let's hope this is a sign of a renewed commitment.