We're starting to wonder if Samsung will have anything left to announce at the London event next week - they've made three new phones and two new tablets official in the small amount of time since the event was scheduled. The latest is the Galaxy S4 Zoom, an update to both the never-ending string of Galaxy S4 variants and last year's Galaxy Camera that's been caught in the wild already. This time around, the device is a phone first: the S4 Zoom has smartphone capabilities as well as pretty respectable point-and-shoot specs. 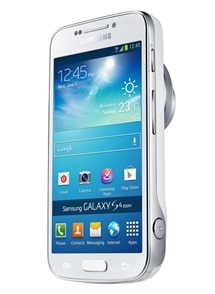 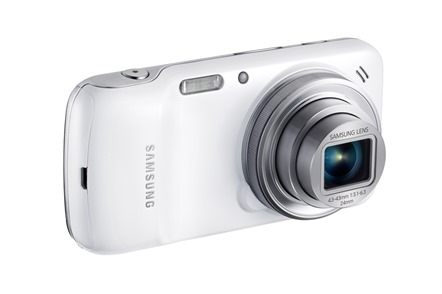 On the phone side of things, the S4 Zoom shares quite a lot with the Galaxy S4 Mini, including a 4.3-inch 960x540 screen (super AMOLED), a 1.5Ghz dual-core processor (which may be slightly altered by market), and both 3G and LTE versions. The phone uses Samsung's ubiquitous 4.2 build of Android with all the bells and whistles. Storage is a rather disappointing 8GB, plus an open MicroSD card slot, with 1.5GB of memory. Battery capacity is 2330mAh and removable. Dimensions are basically like a chunky S4 Mini, at 125.5 x 63.5 x 15.4mm.

As far as the camera goes, the S4 Zoom roughly matches the Galaxy Camera. That big honking lens on the back grants the 16 megapixel sensor 10x optical zoom and optical stabilization, with a decent F-Stop range of F3.1-6.3. ISO goes from 100 all the way to 3200, though hopefully you won't need to go that high thanks to a true xenon flash (not just an LED, like most phones). Users can take photos at to 4 times a second with auto-focus, and video recording tops out at full 1080p at 30 frames per second. The front-facing camera is a decent 1.9MP.

When it comes to software, the camera gets most of the standard point-and-shoot auto modes, along with various specialty functions. The hardware includes a physical shutter button and zoom controls, and the lens zoom ring operates some interesting options, including a quick launch feature and the ability to take photos while in a call and automatically send them to the person on the end of the line via MMS.

As usual, Samsung didn't mention a timeframe or price for the Galaxy S4 Zoom. Russian website Hi-Tech.Mail.ru got some hands-on time with the hardware, and quoted a release date in July with a price of 19,990 rubles (about $620 USD).

Part of the GALAXY S4 family, the GALAXY S4 zoom is the realization of Samsung’s mission to create a single device that can fulfill the role of both an industry leading smartphone and a high-end compact camera. Combining 10x Optical Zoom, 16 Mega Pixel CMOS Sensor, OIS and Xenon Flash with the very latest Samsung GALAXY S4 technology, the GALAXY S4 zoom sets new standards for perfect mobile photography. It is the ultimate smartphone and camera experience in one, and the only device you’ll ever need.

Do it all and miss nothing thanks to the revolutionary new Zoom Ring, a simple and intuitive way to access the GALAXY S4 zoom’s key features. When you’re in the middle of a phone call and you see something you absolutely have to share, a quick twist of the Zoom Ring will activate the In-Call Photo Share feature, letting you capture and send an image directly via MMS to whoever you are talking to simply.

For easy camera navigation, the Zoom Ring can be used to activate the Quick Launch and Shortcut features, giving you instant access to multiple camera modes including Auto, Gallery and Smart Mode with a simple twist.

When it comes to high quality photography, bigger isn’t always better. The compact GALAXY S4 zoom’s best-in-class 10x Optical Zoom and 16MP BSI CMOS Sensor lets you capture beautiful images from far away or up close and personal, in all light conditions, without having to carry heavy camera gear around with you. Furthermore, the built-in Optical Image Stabilizer (OIS) helps keep the camera perfectly still even when you’re not, reducing blur and stabilizing the image while zoomed in for high-quality photos and video.

Photo Suggest instantly connects you to huge libraries of images taken by fellow photographers, to help you find and compose your best shots anywhere in the world. Photo Suggest can even direct you to the ideal nearby location which will give you the vantage point you need for that perfect photo.

The GALAXY S4 zoom also features Samsung’s popular Smart Mode, so you can stop worrying about settings and start taking professional-quality artistic shots. Simply choose from a series of pre-set modes and the camera will automatically adjust to ensure you capture the best photo possible. Use Drama Shot to merge continuous shots of moving objects into a single composed image, or Action Freeze to instantly capture high-speed action. If you aren’t sure which Smart Mode to select, the Smart Mode Suggest feature can assess the scene for you and provide a short list of the best options for your consideration based on surrounding factors such as light levels, focal length, or face detection, ensuring you always get the best shot you want.

AT&T Lights Up LTE In 17 New Markets And Expands Coverage In 7 More, Including Dayton, ...