We don't often throw around the accolade "best" when it comes to product reviews here at Android Police. The dreaded "B" word can land a reviewer in hot water. But if there's one product niche I've been scouring for a long time, it's Bluetooth speakers. There are a vast array of choices out there, many of them quite well known (eg, Jambox), and others, a bit more obscure (like this guy).

I've been fortunate enough to try some of the best of them. But there always seems to be a significant compromise involved, no matter where I go. Whether in portability, sound, or price - something's always got to give, it seems. But finally, I think we have have reached sweet nirvana, dear readers. I really do think the JBL Flip may have brought the best of most worlds into a single device. 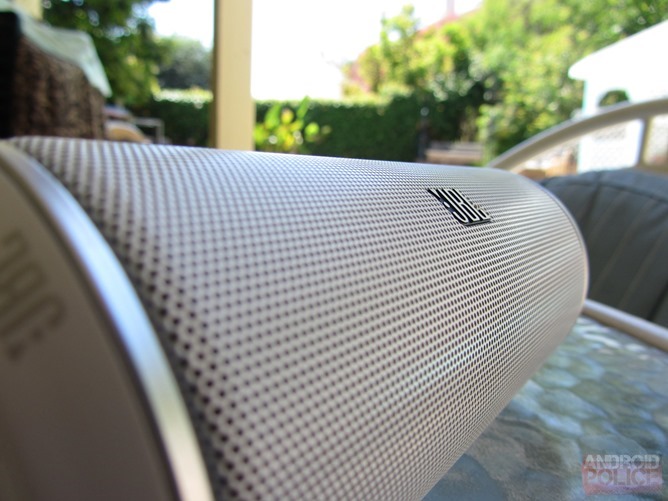 The JBL Flip is pretty unassuming, though not boring, from a design standpoint. It's actually quite clever, in a way - while it is technically designed to play lying flat, a la the two rubber nipples that keep it stationary, it can also be stood upright. The controls are on what then becomes the top of the speaker, making them rather easy to access. The cylindrical shape of the Flip also makes it a lot nicer to pick up and manipulate than a Jambox. 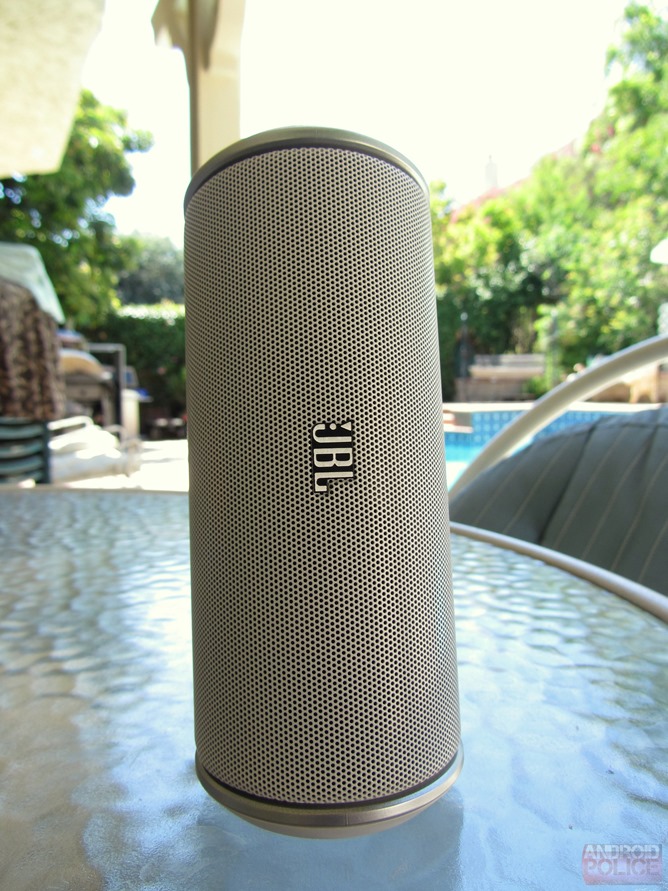 Overall, the Flip feels well put together, and while not having the super-modern minimalist chic of the Jambox, it is far from ugly. It also looks good in white.

One oddly cheap choice of material is the rubber "heel" behind the two nipples along the backside of the cylinder. It's about 3/4" long, and at first I thought it was some sort of latch or port cover, and a quick tug with my fingernail sent it flying. It's just kind of loosely glued on there. The two nipples, though, seem to be of sturdier stuff. 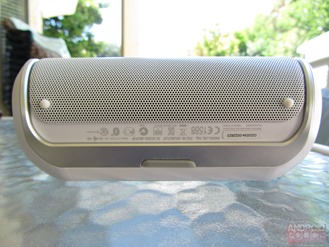 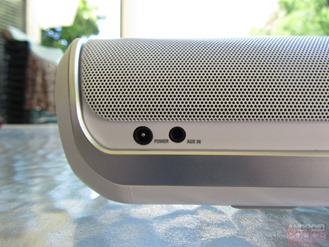 The one drawback that I will really hammer on JBL for on the Flip is the choice of charging interface. It's an (admittedly, pretty common) AC adapter setup with a cumbersomely large power brick attached to the end. This really is the Flip's one, true downfall. However, outside of travel scenarios, this is less of a major flaw, and more a bearable nuisance. But seriously, microUSB is the future, JBL - get with it! 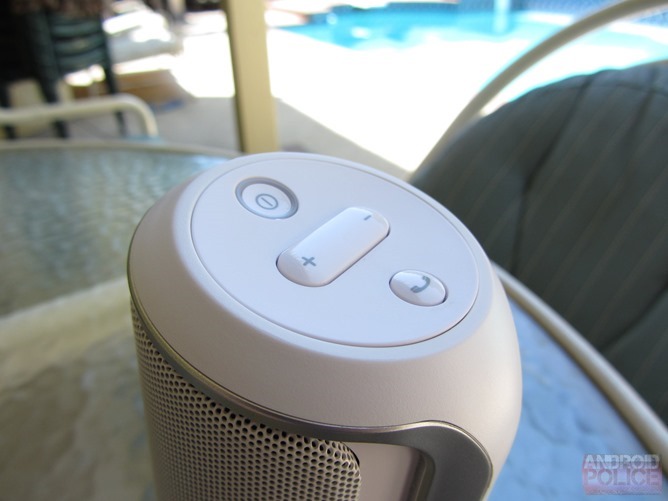 The only other port is the rather standard aux-in, should you prefer to rock out in a wired fashion. The Bluetooth connectivity was functional and provided me no issues. JBL promises ">5 hours" of battery life, which is on the low side, but that figure seems pretty comparable to what I experienced.

Oh, and there's a little form-fitted zip-up sock for your Flip so it doesn't get all dinged up when you travel with it.

This is where the Flip goes from "pretty good" to "great." First off, the Flip decimates the Jambox. And the Braven. And really pretty much any speaker in its size class that I have heard. JBL apparently has some pretty clever acoustics going on in the Flip, along with an ample 10W of peak output from its dual speakers.

The fidelity, loudness, and bass presence of the Flip so far outstrip anything else in its portability class that I often struggle to understand just how JBL is selling this thing for $99. It's incredible. You get [small-]room-filling sound that you simply wouldn't expect to come out of something the size of a Bud tall boy. 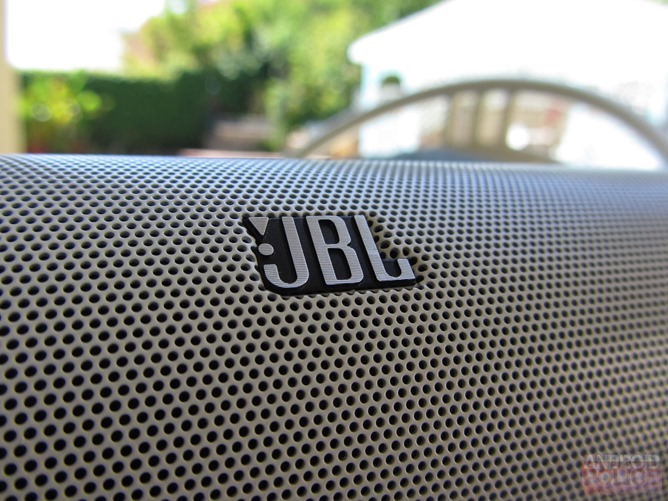 While I don't find fidelity as nuanced as I do on the similarly-priced Soundfreaq Sound Kick (which is much larger), the presence and volume of the Flip is what really seals the deal here. When speakers like the Braven and Jambox sound tinny, empty, or start to rattle their enclosures with bass vibration, the Flip isn't sweating it a bit. You have a lot of room work with, and I don't run it anywhere close to max volume for casual listening.

And compared to a Jambox, this thing sounds just godly. Not even a contest.

The JBL Flip is, almost unquestionably, the king of the hill for small portable Bluetooth speakers right now. While its battery life and proprietary charger do make it a bit less portable than some of its rivals, it easily makes up for such shortcomings with its performance and design. And, more than anything, its price. A hundred bucks for a speaker like this is A.) an incredible value, and B.) yet another great way to tell a lot of products in this segment are sold for far more than they're actually worth.

The sequel to the Flip, the JBL Charge, promises to sound even better (I listened to it, it does sound incredible), and will charge your gadgets. I can't wait to try it out. You can buy the original Flip here (black), and here (white). 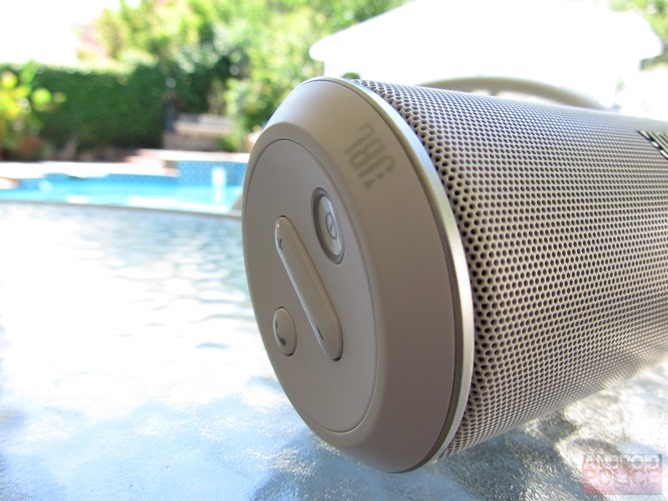