Peer-to-peer fund transfers using an online service are nothing new – Paypal's been successfully doing it for years, and that's how AP writers have been getting paid since the site was launched. Needless to say, when Google announced payments through Gmail (which uses Wallet), it seemed like a no-brainer – we all have Google accounts, so this would be an ideal way to get paid.

Wrong. Getting paid through Wallet has been the absolute worst experience I've ever had with a money transfer, and I'm not alone here – this has been an incredibly frustrating experience for at least half of our team. To add insult to injury, Google Wallet's "support" line is filled with some of the most unprepared, ignorant, untrained personnel that I've ever dealt with.

Here's the story, and why you should stay away from using Google Wallet for transferring money unless you want to deal with randomly placed holds on funds, clueless support, countless delays, and accusations of violating terms of service.

It sounded like a good idea at the time

For our most recent paychecks, Artem asked if we'd like to be paid with Wallet. Curious to see how the service worked, most of us agreed. Considering all of my past experiences with Google Wallet were basically pleasant (read: not "I'm ready to set the world on fire" frustrating), I expected the entire thing to go off without a hitch.

I couldn't have been more wrong.

The funds showed up as "processing" in my Wallet account almost immediately; unlike with Paypal, they were not available for immediate transfer to my bank (despite the fact that the Wallet FAQ notes "sending money using your credit or debit card is almost immediate, and usually takes up to a couple of minutes). There was a note attached to the Processing tag stating that funds "usually arrive in less than 24 hours, but in some cases might take up to 10 days." Naturally, I waited.

It took four days before the funds were even available in my Wallet account. But that's not even the worst part. Far from it, in fact.

After about 48 hours, I contacted Google Wallet's "support" line to find out what was taking so long. After speaking with a representative who I could barely understand for about 20 minutes, I was told the sender (Artem) needed to contact Wallet because there was an issue. Fantastic.

And it only gets worse from here.

Artem promptly called them to clear any potential issues – this is where we first got a glimpse of how utterly clueless and untrained Google's Wallet support actually is. Initially, they told him that there wasn't an issue and I needed to "accept" the funds, because it was the first payment that had been sent to me. This information was incorrect, because Ron had previously sent me a penny in order to activate the "pay through Gmail" feature in the first place. Wallet's outsourced support had no idea – they were just throwing ideas at the wall to see what would stick.

Next, they told Artem I needed to verify my Wallet account – something that I did months, possibly even a year or longer, earlier. Again, they had no idea. My bank account was also verified, but that shouldn't have mattered either way at this point in the process.

After the "support specialist" had tried everything that the pre-scripted documents told him to do, Artem was asked to call back in two hours' time so he could speak with an account manager of some sort. Apparently those guys get to sleep in.

From what we understand, Wallet's support team can only talk to account managers via chat, and the person with the actual issue (in this case, Artem) can't talk directly to the manager. Everything has to be done vicariously through a support agent, who is on the phone with you and in chat with a manager.

Two more days pass, and the funds were finally available in my Wallet account. For those who are keeping count, that's 96 hours (or four days) of processing time. Now, the trouble starts for several other team members. No fewer than three of my colleagues' payments were inexplicably cancelled by Google Wallet, even after Wallet support told Artem all other transactions outside of mine were fine.

Thank you for using Google Wallet. We understand that you are concerned about the incomplete state of your recent transaction and apologize for any inconvenience it may have caused you. To ensure a safe purchasing environment, Google Wallet reviews transactions on a regular basis, considering a variety of factors in each review.

A support specialist has researched your account and resolved your issue. You may now continue to use Google Wallet as normal and can view the status of any past transactions at wallet.google.com/manage.

So, why the cancellation? Because Artem was "adding then withdrawing lots of funds from [his] Google Wallet Balance or sending/receiving money in a way that may violate their Terms of Service" – even though he was still well within the $50,000/5 day transfer limit.

Thanks for your email. I apologize for the inconvenience. We recently noticed that you're adding then withdrawing lots of funds from your Google Wallet Balance or sending/receiving money in a way that may violate our Terms of Service. As such, the transaction(s) in question have been cancelled. 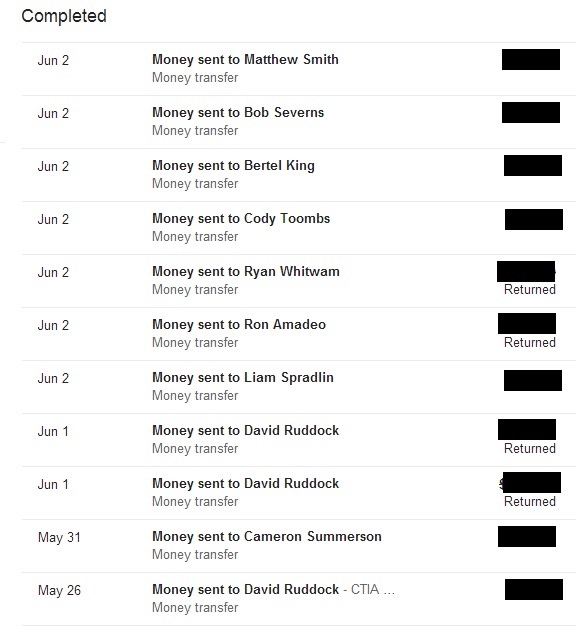 What part of the Terms of Service were being violated here? According to Wallet support, Section 7:

Notwithstanding any limitations described elsewhere in this Agreement, we may establish general practices and limits concerning use of the Services, including without limitation individual or aggregate transaction limits on the dollar amount or number of transactions during any specified time period(s).

Basically, they said he was sending too many transactions at the same time. So, why does this violate the terms? Because, according to Wallet, he could've been using the transactions to "rack up airline miles/rewards points or get cash advances," or effectively taking advantage of the "no credit or debit card fees" promotion (which has since been adjusted to apply only to the first $250 worth of transfers).

We wanted to offer a friendly reminder that the peer to peer service is intended for Google Wallet customers to send money to other persons, and not to rack up airline miles/rewards points or get cash advances. We view such transactions as misconduct under section 7 of the Google Wallet Terms of Services, and may decline to process such transactions or close your account if we identify in the future that you are using your account (and the no fee promotional period) for these purposes. I recommend at this time to reattempt the transaction.

That's a pretty damn strong accusation to throw at someone without any sort of evidence. At this point, three of my colleagues' payments have been completely cancelled based on an assumption that Artem was in violation of the ToS. Without evidence. To make matters worse, they offered no way to reverse the decision. It was done. 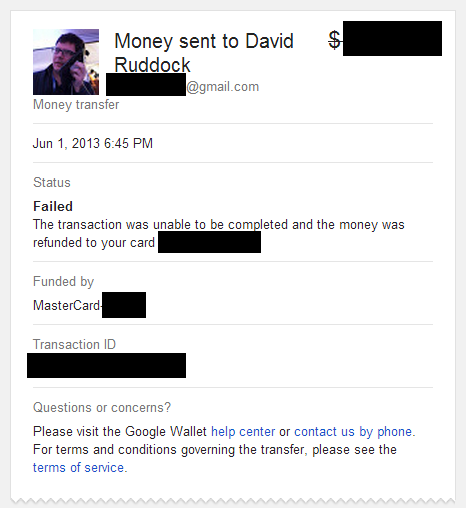 You can see the beginnings of his frustration here.

Google Wallet's Support has no clue what's going on, and you can take that to the bank

After my four day "processing" period, I started the transfer of funds to my bank. Surely things would go smoothly moving forward, right? Again, wrong.

According to Wallet, moving funds from your Wallet balance to your bank account should take about two days. Three days passed, and nothing had changed. At the end of day three, the status on my Wallet account changed from "transferring" to "complete" – could it be? Did the transaction finally go through?

Hell no. The funds still weren't in my account. I gave it until the following morning – which was yesterday. My bank deposits electronic transfers promptly at 4:15 AM PT every day, so I expected to wake to a bank account full of money (OK, not full, but not empty). No cigar. Once again, I was on the phone with Google Wallet. 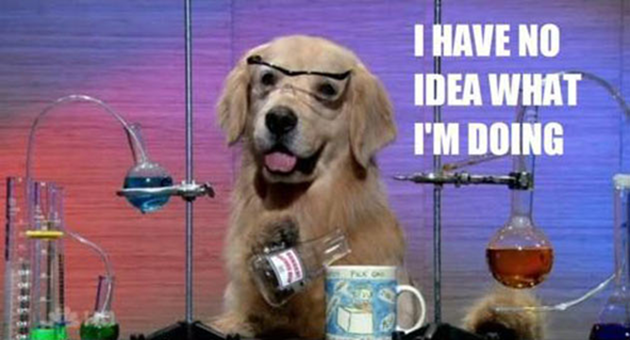 Here's what the Wallet support agent was able to tell me: the transaction shows as completed on their end, and I need to contact my bank. Fantastic.

I called the bank, which needs more info about the transaction itself – information that only Google Wallet can provide. Back to Wallet support I go, and this is where my frustration levels go through the roof.

The list of things my bank needs to track the transfer is pretty short:

Out of that list, two of the items are already accessible to me, so I only needed Wallet support to provide three pieces of information.

After speaking with three different representatives, they had no idea what I was talking about and said my issue "needed to be escalated" because the transaction was already showing as complete on their end. I was put on hold no fewer than five times while the rep "looked through the resources" for answers to my questions. Every single time, they said the same thing upon returning: they'll have to escalate my issue.

It was painfully obvious they had no idea what I needed or how to access that information. It can only be assumed they have approximately five screens of information, and if your question is outside of the realm of what that information covers, they immediately turn into lost puppies and have no idea what to do aside from spit out robotic pre-written statements about escalation.

I still haven't gotten my money, and it's been nine days since all this started. Paypal takes approximately two days, and I've never had to contact their support team. It just works.

If this were my real wallet, I'd take it outside and burn it 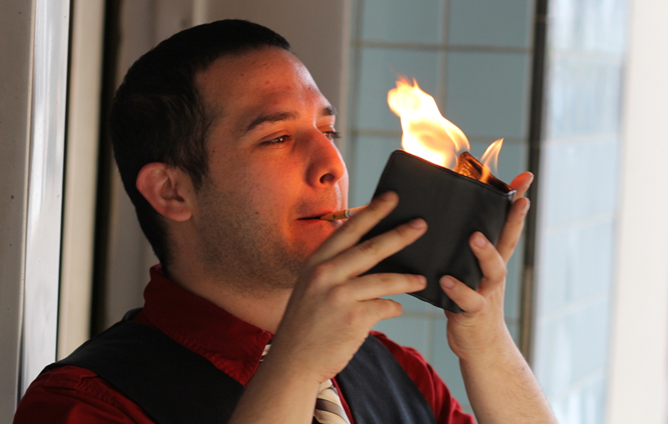 Here we are, more than a week and several phone calls later, and this is the most frustrating online experience I've ever had. The amount of headache caused by untrained support technicians has not only affected me, but also Artem and several other AP team members.

Google Wallet's support team has no idea what it's doing. The outsourced company seems to have no idea about how money transfers work, so they inherently have no understanding of the very service they're supposed to be supporting. The documentation and access to information is severely limited, so the only solution these people have is to brush you off and have you call back, or say the issue is being "escalated."

Google wasn't ready to make the leap into peer-to-peer money transactions. Its system downright sucks and is riddled with problems, the outsourced support is an untrained mess, and trying to find any information required so the bank can trace the transfer is virtually impossible.

Of all the Google service catastrophes I've ever encountered, this one is by far the worst. This isn't people's email, chat logs, or search history they're dealing with – it's their money. In some cases (like mine), it's their livelihood.

That's just something you don't mess with.

Update: About two hours after this story went up, a "Manager Specialist" from Pay by Gmail contacted me through email to let me know that my issue has been escalated to her and she was going to get the trace number to find out what happened the funds, as it was "concerning that the amount is still not reflected in your bank account after more than 24 hours." They also credited my Wallet account $50 "as an apology for the inconvenience."