SamMobile published an image this afternoon that really kind of explains itself: this is, purportedly, the Galaxy S4 Zoom. The concept is obviously pretty simple - it's a Samsung smartphone with a big-ass camera mounted on the back. Don't get your hopes too far up on the smartphone aspect, though, as even SamMobile is tempering expectations on the specifications. Allegedly, the S4 Zoom will be packing a 4.3" qHD display, dual-core 1.6GHz processor (likely a Qualcomm chip), 8GB of internal storage (with microSD slot, of course), and Android 4.2.2. 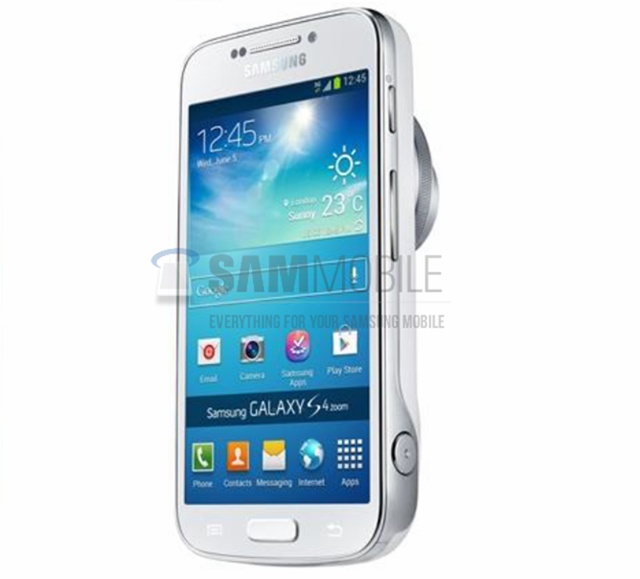 So, essentially, this is more like a Galaxy S4 Mini that has had aforementioned freakishly large camera module attached to it. The camera will supposedly pack a 16MP sensor (sensor size unknown as of yet) with an unspecified amount of optical zoom capability. I'm not exactly sure who this is going to appeal to - a mid-range smartphone with a high-end camera that is going to be ridiculously thick - but I guess Samsung's at least trying some different form factors out.

The volume rocker has been moved to the right (top) side to act as a zoom control, and an added circular shutter button is a duh-obvious design decision.

As for the authenticity of the image, it's pretty hard to go one way or the other. On the one hand, the angle lines up exactly with previous Samsung press shots, though the June 5th date is a bit odd, considering most people are expecting the Galaxy S4 Zoom to be unveiled at Samsung's June 20th event in London. The dark blue band with the product name scrawled across the homescreen isn't exactly normal, either. The overall quality of the image - aside from the fact that is blown up beyond its original dimensions - is also fairly convincing.

The one thing I would note is that the zoom lens appears to be sticking ridiculously far out from the body of the phone, so far as to be almost un-pocketable, in my mind. However, it's entirely possible this is just the angle playing visual tricks, or that this image depicts the lens extended.

It's worth nothing there's also nothing here that outright screams "fake." It's a tough call. I guess we'll have to wait until June 20th to be sure.