If you're looking for an audio-focused smartphone and some sweet speakers to use it with, have we got a deal for you. Today the AT&T website published one of its occasional package deals, a 32GB HTC One plus the Beats Audio Pill Bluetooth speaker for $99.99 together. Naturally you'll need to sign a new two-year contract with AT&T in order to take advantage of the price, but even if you don't care about the portable speaker at all, it's $100 off the base price of one of the best Android smartphones around. 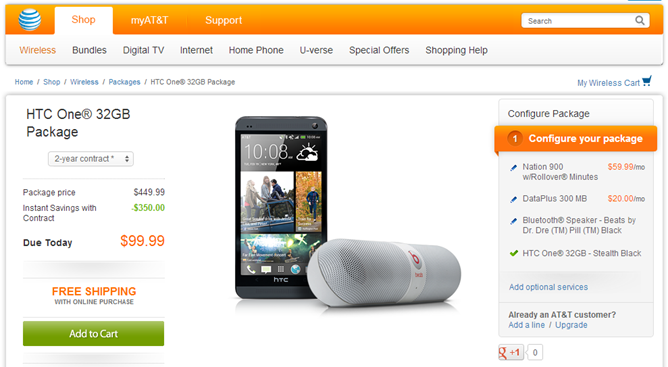 Let's take a look at the prices, shall we? With a two-year contract, the 32GB version of the HTC One is $199.99 of anybody's money at AT&T. The Beats Pill Bluetooth speaker is technically discontinued, but it's still going for just under $200 at Amazon. The 32GB One is $129.99 at Amazon. Assuming that you want both the phone and the speaker, that's a net savings of $300 off the retail price for the package, and a solid $230 off the "bargain hunter" price. (Just for comparison, the cheapest you can get the Galaxy S4 on AT&T is $199 for the 16GB version, and $249 for 32GB.) It comes with free shipping, but you'll have to pay AT&T's $36 activation fee.

The Beats Pill is one of a new crop of mobile-focused Bluetooth speakers with integrated batteries. It comes with both line-in (for devices that don't have Bluetooth) and line-out (for connecting to a larger stereo) ports, and an integrated microphone allows the Pill to function as an external speakerphone. A unique feature is an integrated NFC reader, which allows the Pill to quickly pair with a similarly-equipped smartphone like the One. Online reviews put the Pill at between 3 and 4 starts - not fantastic and lacking in bass, but otherwise serviceable, and somewhat expensive compared to other units in its size range.

If you'd like to take advantage of AT&T's package deal, you may want to hurry - it's probably limited by the amount of Pill speakers that AT&T has in stock. You can get the HTC One in silver or black, but the silver/white version of the Pill is the only one advertised, so choose the former if you want to color coordinate.