So the Samsung Galaxy S4 isn't doing it for you (or you don't want to spend the extra dough for one on T-Mobile's new contract-free plans) but you still want that sweet, sweet LTE speed. No worries: the carrier has been planning on releasing an updated model of the still-popular Galaxy S III to take advantage of their fledgling long term evolution network. Tmo's Galaxy S III LTE is available now on the web store, for $549.99 outright. You can also choose to pay $69.99 down and $20 a month over 24 months. It looks like the phone is only available in white at the moment. 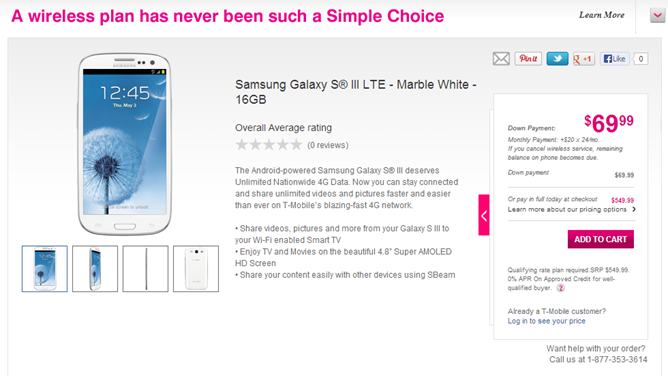 This is essentially the same Galaxy S III that AT&T has been using for a year, with a small tweak to accommodate T-Mobile's LTE bands. Those who purchased the original T-Mobile S III might be a little miffed, but it was released a bit too early to account for the upgraded network (the Galaxy Note II, released last fall, had its LTE radio enabled via a software upgrade). The S III LTE has popped onto the web store briefly once before, but now it's been officially added to the Phones list. You should see it in retail stores today or not long after.

The Galaxy S III LTE compares well enough with the S4, since the latter is a full $80 more outright (with a large $149.99 down for those going the installment route). But if I was in the market for a new T-Mobile phone, I'd shell out another thirty bucks and get the HTC One, or go for an even lower price with the Nexus 4 (which, to be fair, lacks LTE). Still, it's nice to have the choice.

By the way, the original T-Mobile HSPA+ version of the S III is also $549 - at this point, that would be a very poor choice indeed.