Stylus inputs for smartphones and tablets have become largely obsolete, with the exception of devices packing an integrated digitizer and active stylus, like Samsung's Note series and a few others. But some of us love our styli, as millions of cheap, plastic passive pens lining iPad accessory bargain bins across the country demonstrate. NVIDIA is hoping to boost the capability of passive stylus input on Tegra 4 hardware with its DirectStylus solution, a way for a standard capacitive touchscreen to more accurately emulate pen and paper. 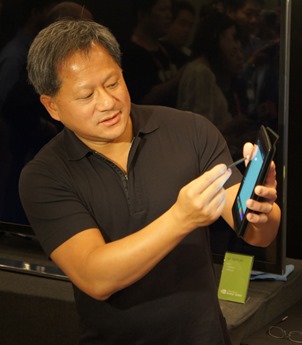 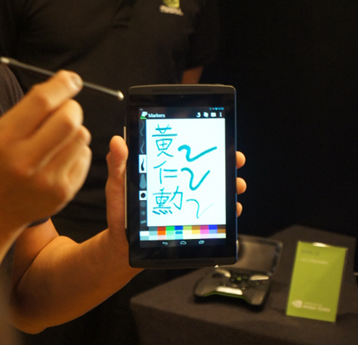 DirectStylus works by using NVIDIA's Direct Touch 2.0 software to bump touch input scans up to 300 times a second, then applies some of Tegra's GPU power to interpret the results. NVIDIA claims that this technology can easily distinguish between fingers and styli of different "weights," allowing for more accurate and variable digital pen strokes. Users can then flip the stylus for a quick switch to eraser mode. This is primarily targeted towards Asian markets, where this technology can be applied to sensitive character notation. NVIDIA CEO Jen Hsun- Huang showed off the technology by writing his name in traditional Chinese characters with a conventional passive stylus at Computex.

The software is Tegra-specific, but there's nothing on display here that couldn't be emulated on sufficiently powerful hardware. While passive solutions like DirectStylus aren't going to replace digitizers and active styli any time soon, it's certainly nice to see a little innovation in this particular niche. We'll have to test it out on the first Tegra 4 hardware we come across.\

Update: Singapore Hardware Zone has video of Huang demonstrating DirectStylus on the Computex floor. Thanks to commenter heat361 for the tip.

President Obama Proposes Patent Troll Laws That Will Probably Do Very Little To Stop Most ...