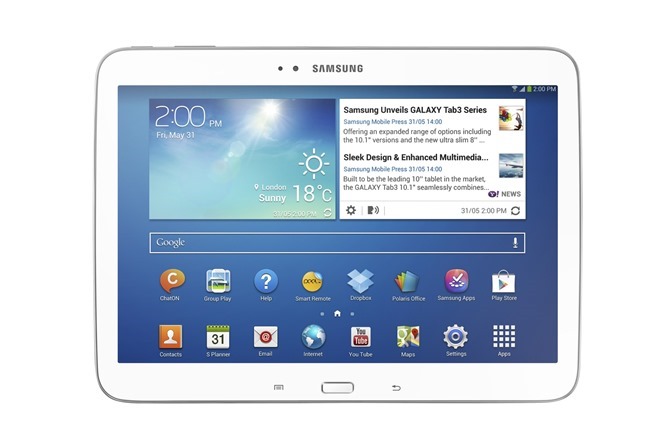 Also inside the 3G HSPA+ and LTE versions of the 10-inch Tab 3 is an Intel radio, included in the Clover Trail+ system-on-a-chip. 3G models get the XMM 6262 radio, while the LTE models will pack an XMM 7160. The Z2560 is a dual-core chip clocked at 1.6Ghz, and includes the SGX 544MP2 GPU clocked at 400Mhz. Intel claims that the SoC provides double the performance and triple the graphical capabilities of earlier Atom-powered Android devices, with "competitive" battery life.

The 10-inch Galaxy Tab 3 is Samsung's first Intel-powered Android tablet. Both the 7-inch and 8-inch versions of the Galaxy Tab 3 will stick with Samsung-designed processors. The new Galaxy Tab 3 models are set to launch worldwide later this month.

“Customers are selecting Intel technology because it offers the best balance of high performance, power efficiency and battery life,” said Hermann Eul, Intel vice president and general manager of the company’s Mobile and Communications Group. “It’s ultimately about the consumer experience, and we are confident people will be pleased with what Intel Inside®has to offer.”