Say hello to Toshiba's 2013 Android tablet lineup. Though the company still hasn't made a dent in the tablet market, it's not for lack of trying, and the latest trio of ten-inchers proves that they're not ready to give up the ghost. All three have roughly the same body and dimensions: the Excite Pure is Toshiba's new low-end offering, the Excite Pro is for gamers and resolution junkies, and the Excite Write steps up to Samsung with both high-end specifications and a digitizer-stylus combo. 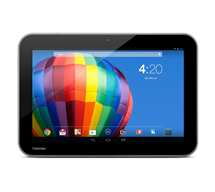 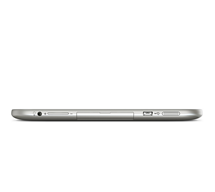 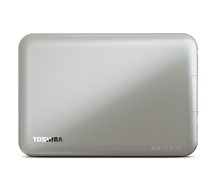 The Excite Pure is decidedly uninspiring, offering even less hardware prowess than the current Excite 10. It's a basic 10-inch, 1280x800 model powered by the Tegra 3 SoC, and just 1GB of memory, though it does get Android 4.2 at launch. The Pure will be offered only in a 16GB model with MicroSD card expansion, a 3MP rear camera, and a MicroHDMI port. The Excite Pure will retail for $299.99. 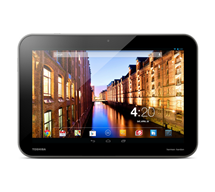 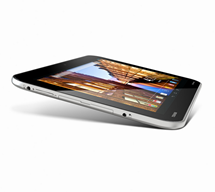 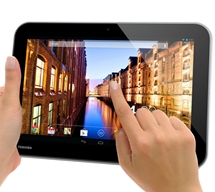 Stepping things up a bit, The Excite Pro bumps the screen to 2560x1600 (which Toshiba is calling "PixelPure" resolution), matching the Nexus 10 and ASUS' upcoming Transformer Pad Infinity refresh. It's also the latest in a growing lineup of NVIDIA Tegra 4 tablets, with 2GB of RAM, 32GB of standard storage plus MicroSD, an 8 megapixel rear camera, MicroHDMI, and stereo speakers provided by Harmon Kardon. It also runs Android 4.2, and will retail for $499.99. 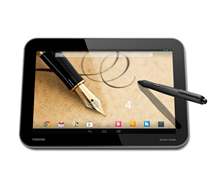 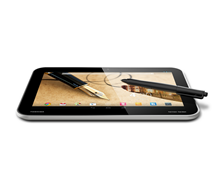 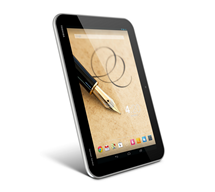 The big daddy of the new lineup is the Excite Write. The Write is essentially the same tablet as the Excite Pro, with the crucial addition of an advanced digitizer and stylus, aping (not to mention outperforming) the Galaxy Note 10.1. Toshiba is calling the 1024-point pressure sensitive stylus a "TruPen," because electronics companies have some kind of strange aversion to accurate, simple terminology. Also: it doesn't dock into the tablet's housing. Naturally the Write will be loaded with a suite of notation-focused apps, going under the banner of "TruNote," plus ThinkFree Office. The screen also comes with Gorilla Glass 2 for protection. Beyond that, and the $599.99 retail price, it's identical to the Excite Pro. (Just for reference, that price exceeds the Note 10.1's introductory MSRP by a full $100.)

All three tablets will be available at US retailers and directly from Toshiba's website starting in July. Because of their uniform exterior, they'll all be compatible with Toshiba's first-party Bluetooth keyboard/cover, though the company isn't saying how much the accessory will cost.

Pixel Perfection for the Eyes, Sublime Sound for the Ears
Excite Pro and Excite Write models are the first Toshiba tablets to feature a 2560 x 1600 native screen resolution, currently the highest in the tablet market. Pushing an astounding 4 million pixels (300 pixels per inch), images, video and text come alive across the 10.1-inch PixelPure display[2] with stunning color and razor-sharp clarity, making it an ideal choice for entertainment-lovers, photo enthusiasts and image-quality seekers.

Proving that sound quality doesn't have to be sacrificed on a tablet device, Excite Pro and Write models utilize Harman Kardonstereo speakers, making them the first tablets to feature speakers from a premium audio brand. Enhanced with DTS® Premium Voice Pro audio processing technology, the audio experience on these two devices is hallmarked by more natural sound with enhanced bass, audio leveling and more clarity for VoIP web chats.

A "Tru" Boost in Productivity
Outfitted with a digitizer display and precision TruPen featuring 1024 pressure points, Excite Write delivers greater productivity possibilities by bringing a 'pen and paper' experience to the tablet screen. Most ideal for students, as well as mobile and creative professionals, Write models offer the precision and performance needed for note-taking and sketching. Loaded with Toshiba's own TruNote application providing a fun and easy way to store, organize, navigate and edit their notes, as well as a full version of ThinkFree Office Mobile for Android, Write users can easily create and edit documents with greater creativity and accuracy. Productivity capabilities are enhanced further with TruCapture, a Toshiba-developed application that quickly and easily captures whiteboard content using the tablet's built-in camera and converts the snapshot for easier integration into presentations and documents.

Blazing Performance for Browsing, Games and Entertainment
All three Excite models are equipped with the processing power of NVIDIA Tegra. Pro and Write models are among the first to feature the NVIDIA Tegra 4 mobile processor, delivering greater power and efficiency, along with new camera capabilities. Equipped with an 8MP F2.2 camera, Pro and Write models achieve robust photo-taking capabilities by enabling high-dynamic range (HDR) and panorama effects, in addition to steadier shooting with enhanced image stabilization.

"NVIDIA Tegra processors bring an unmatched multimedia experience to the new Excite tablets from Toshiba, one of the world's most popular computing brands," said Matt Wuebbling , director of product marketing for the Mobile business at NVIDIA. "With Tegra, the Excite family features incredibly fast web browsing and new productivity and creativity tools that professionals and consumers will both enjoy."

All three tablet models will be available beginning on June 25, 2013 and can be purchased directly from Toshiba atToshibaDirect.com or from major retailers and e-tailers nationwide beginning in early July.