Samsung's Galaxy Camera is an undeniably unique device... and long-time gadget hounds will know that "unique" is often synonymous with "expensive." $500 is a lot for a point-and-shoot camera, even one that runs Android 4.1, but once again eBay's Daily Deals is offering it at a significant discount. Seller never-msrp has the white EK-GC100 model Galaxy Camera (AT&T/international 3G) for $369.95, without a contract. That's a savings of $130.05, a bit more than 25% off AT&T's retail price (not to mention a cool $100 off the last Galaxy Camera deal). 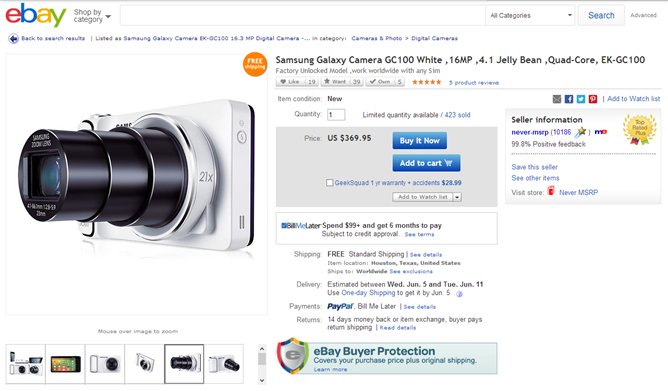 If white's not your color, the same seller is offering black and red versions of the Galaxy Camera for $399.94 and $435.00, respectively. That's a pretty significant increase for a color change, and we've got no way to verify the claims that these models are in short supply. But they're both still beneath the MSRP, so go nuts if you like.

All three Galaxy Cameras are offered with free shipping to the United States (though the seller warns that USPS will take up to 8 days to deliver) and worldwide via FedEx or DHL. It's worth mentioning that one Amazon affiliate has the white model for $375, and it's eligible for free Prime shipping.

ASUS Transformer AiO Review: A Hybrid Device That Actually Gets It Right