ARM is kind of of big deal if you like mobile devices: they release and maintain the architectures licensed by nearly all the world's mobile System-on-a-Chip (SoC) makers. Today they've announced new CPU and GPU designs specifically targeted ant the growing mid-range market, the Cortex-A12 and Mali-T622. This silicon is powerful by today's standards, but a bit less so than their A15 (Samsung's Exynos 5250, NVIDIA Tegra 4) and T624 (and higher) counterparts, designed for more economical implementation. The basic idea is that mid-range devices, which ARM defines as between $150 and $350 unsubsidized, will get both more powerful and more efficient. 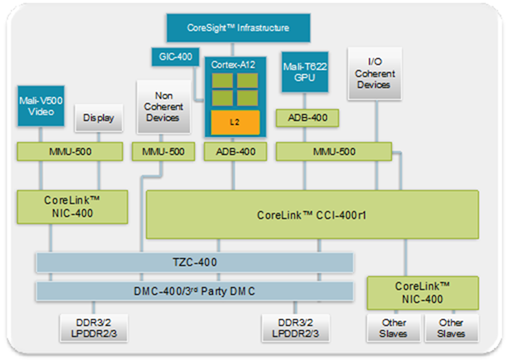 The Cortex-A12 is ARM's new mid-range architecture, which they claim is more capable and just as efficient as the older A9. Processors based on the Cortex-A12 will boost speed of single-thread operations by 40% over the A9, with a 30% smaller chip size thanks to its 28nm build process. More esoteric features include big.LITTLE processing for coupling with low-power A7 chips, a whopping 1 terabyte of addressable memory (a theoretical 1TB limit of RAM capacity), and software support for virtualization and TrustZone security. All of these are features of the more powerful A15 and A5* designs. ARM claims that pairing the A12 with the A7 processor in a big.LITTLE configuration can boost SoC power efficiency by as much as 100%.

The Mali-T622 GPU sits between the Mali-T604 and the upcoming Mali-T624 architectures, using the newer 2nd-generation Midgard standard. ARM claims that the T622 offers 50% more efficiency than the older generation (T604, found in the Exynos 5250 SoC) with multi-core rendering for up to OpenGL ES 3.0, DirecX 11, and OpenCL 1.1. Mali-T622 designs can be implemented in both single-core and dual-core configurations. The CoreLink CCI-400 cache interconnect between the Mali-T622 GPU and the Cortex A12 processor can share L2 cache among them, allowing for voltage scaling and more efficient power management. 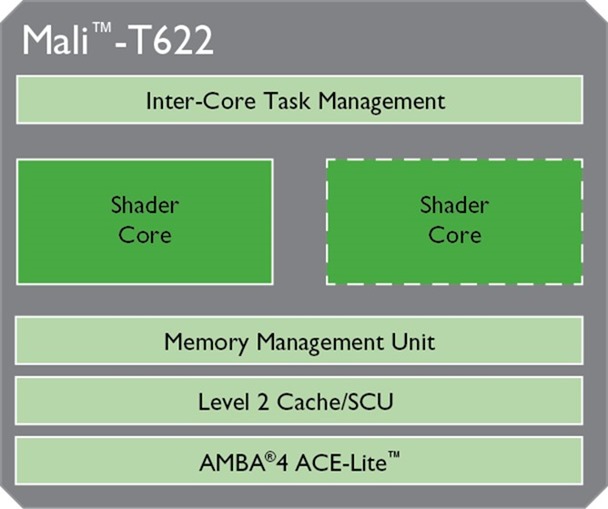 Lastly, ARM announced the Mali-V500 video solution for scaling both encoding and decoding video processes. On a single GPU core, Mali-V500 can handle 1080p encoding at 60 frames per second, and decoding (playback) of 4K video at 120 frames per second. (This doesn't mean much for devices themselves, but outputting to a 4K TV or monitor with super-high framerate content should be possible.)

CAMBRIDGE, England & TAIPEI, Taiwan--(BUSINESS WIRE)--Today at Computex, ARM announced an optimized IP solution designed to power the 580 million mid-range mobile devices expected over the next two years. The mid-range market is projected to exceed the number of premium smartphones and tablets beginning in 2015. Targeted at the mid-range market, this new suite of ARM IP is optimized for power, performance and die size. Used together, this suite of IP will provide consumers with premium features like virtualization, big.LITTLE processing and GPU compute at mid-range price points.

The suite extends the ARM® Cortex®-A processor and ARM Mali™-T GPU series with the Cortex-A12 processor and Mali-T622 GPU and introduces a new video IP product, the Mali-V500. With support from ARM POP™ technology and the ARM Development Studio 5 (DS-5™) toolchain, ARM partners can deliver smartphones and tablets with higher efficiency and reduced time to market. Partners will announce their plans in due course, but ARM expects this IP solution will be in mobile devices by mid-2014.

“Mobile users expect a range of devices at different price points and for a mid-range mobile experience to include some high end mobile features. With a billion smartphones predicted to ship in 2013 and tablets projected to out-ship notebook PCs, device-makers can now provide quality, high-performance mobile products with the features that matter the most, at a range of price points,” said Ian Drew, chief marketing officer and executive vice president, ARM. “The market is evolving at an amazing rate and there is now a choice of solutions for semiconductor companies and for mobile device-makers. Our suite of optimized IP expands the choice for the mid-range mobile market.”

The Mali-T622 GPU, is OpenGL ES 3.0 conformant, supports the Renderscript and OpenCL™ APIs, and is the smallest full profile GPU Compute solution available for mobile devices. The Mali-T622 GPU brings a rich, visual experience to mid-range mobile devices with functionality only now becoming available in the highest-end premium smartphones and tablets. It does all of this while providing a 50 percent energy-efficiency improvement over first-generation Mali-T600 series products. A closer look at the Mali-T622 GPU can be found here.

Acer Announces The Liquid S1 – A 5.7-Inch Mid-Range Smartphone With Almost-Stock Android And No ...