One of the truest shared experiences between people who create anything for public consumption is a ravenous desire to know how many people are using it and what they think. Just ask most bloggers and web developers, and you will hear how much they love the real-time statistics from Google Analytics. Unfortunately for app developers, there really isn't a great way to keep fresh information in front of our eyes without mashing the F5 key while staring at a web browser. The engineers at cloud.tv, known for HD Widgets, felt the same way and created App Stats, a very capable tracking and notification app. 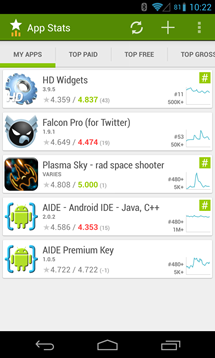 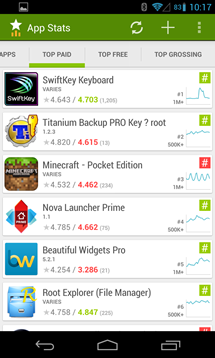 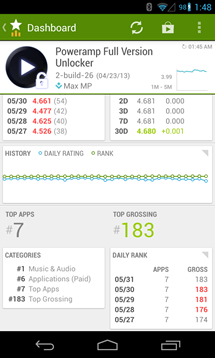 Upon running App Stats, you are immediately greeted with a page for your own favorite apps, followed by pages dedicated to each of the "Top" categories in the Play Store. Apps are displayed with the current version number and rating, the always familiar sales chart, and may include a notification icon to indicate major changes. Tapping on an entry will show the recent changes and current standings in different categories, yet, you can drill down further on each table to get complete 30-day data that should be detailed enough to make a statistician weep.

As you can imagine, all of this information would be useless if it were old or out of context. For that reason, the app can be configured to update in intervals between 15 minutes and 24 hours, along with the option to require WiFi. You can also choose which events are important enough to warrant notification flags, which includes almost any appreciable change to the app, it's ranking, or if it appears in any of the featured lists. 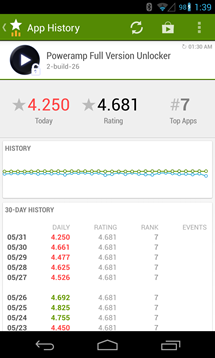 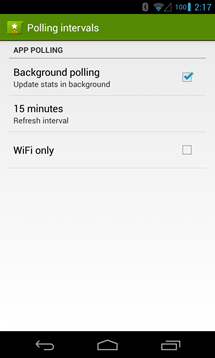 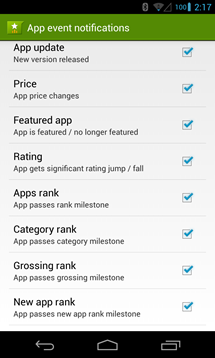 Obviously, the data here is nothing that can't be seen with diligent observation of publicly visible Play Store pages, and for that reason, App Stats is not meant to be a total analytics solution. The benefit comes in the form of having a clear view of how apps are performing and if there are sudden changes that demand attention. Of course, this is also a great tool for keeping an eye on the competition to see if they have released an important new update or initiated a sale.

App Stats is free for now, but the description in the Play Store clearly states that it should be considered a "free trial / beta preview," and will eventually require a subscription. Understandably, the team needs to determine how much demand there is for the app and if it will be worth supporting. They are also seeking feedback for new features, bugs, and anything else that can be done to improve the experience. If you would like to give it a shot, hit the widget below and let the developers know what you think.