The @evleaks Twitter account has become a surprisingly accurate source for pre-release hardware information, and the elusive Samsung Galaxy S4 Active is its latest target. The tipster revealed to The Unlockr that the ruggedized version of the S4 will be headed to AT&T's network in the near future, along with a handful of other Samsung phones, including the Galaxy S4 Mini, S III Mini, and the Galaxy Mega 6.3. Only the Active was shown with a convincing set of AT&T-branded press shots, so that's what we'll focus on. 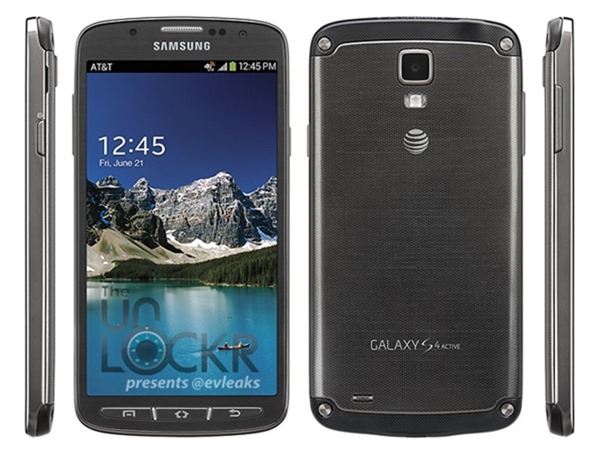 The Ma Bell variant of the Active will come with the SGH-I537 product name, according to the leak, and will be available in the smoky grey color shown above as well as teal. The Unlockr reports that the phone will be powered by a 1.9Ghz Snapdragon 600 quad-core processor, making it a true brother to the LTE Galaxy S4 (and clashing with some previously leaked information). The screen is the same 5-inch, 1080p Super AMOLED beauty seen on the non-ruggedized version of the hardware.

This leak gives us a pretty good look at the phone itself, and for a ruggedized device, it's pretty snazzy. The S4 Active successfully combines the tough-as-nails looks and physical control buttons of Samsung's Rugby Smart phones with the smooth lines and small bezels of the existing S4. It's a bit thicker, but that's a tradeoff for what will likely be at least some kind of military spec for water, dust, and shock resistance. It's still not clear if the S4 Active has a removable battery or MicroSD card slot, but for those looking for more durability in a full-sized smartphone, they might just be worthy trade-offs.

Consider all of this rumor until Samsung verifies it, possibly at the June 20th event in London - note the June 21st date in the press shots.

[The Android Police Podcast] Episode 63: Weinhard, With A Vengeance