Here's some unexpected news. Two new livestream videos have popped up on Google's Developers website, counting down to their respective start times. Both are marked as events especially for the mobile version of Chrome (presumably Android and iOS), and both have no more details to share at the moment. The first livestream is scheduled to start on June 7th at 1PM Eastern Daylight Time, the second is scheduled for June 13th at 11AM EDT. 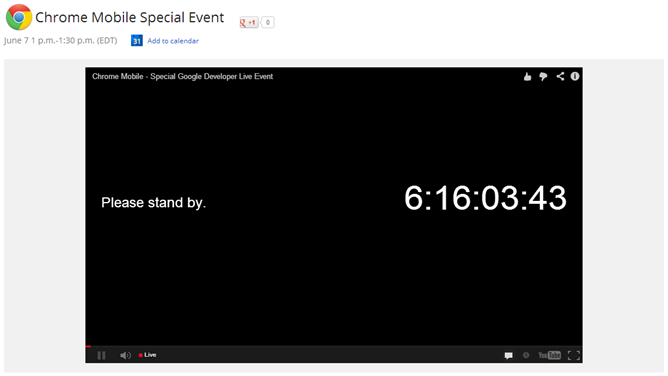 We'll be honest, we've got no idea what's in store at these events. To our knowledge, Google has never held an event especially for Chrome, and certainly not for the mobile versions. It's odd to see something like this just a few weeks after Google I/O. The first video is marked "Chrome Mobile Special Event," the second is slightly different, "Mobile Chrome Special Event," but it's unlikely that there's anything significant to that.

What's Google got up its sleeve? A major update? More desktop browser integration? Dare we dream of extension support for mobile Chrome? Hopefully we'll find out in a week (or possibly two).

Update: Google has updated both videos with descriptions... and it turns out they're a lot less interesting than we'd hoped. The June 7th video is titled Behind the <div>'s: Chrome Roll It (the Wii-like bowling game) and the June 13th video is Behind the <div>'s: Chrome Racer (the multi-device slot car racing game shown at Google I/O). Carry on, folks, nothing to see here.

Google Glass Team Says Facial Recognition Apps Will Not Be Approved, But Can They Stop Anyone ...