If you're running Android 4.2, odds are pretty good that you have also installed Roman Nurik's popular lock screen widget, DashClock Widget. Now, thanks to the new method of running beta tests in the Play Store, you can also try out the latest features and improvements before they officially launch. By joining this program, test versions pop up as if they were regular updates.

The setup process is quick and painless. Simply perform these 3 steps:

There are a few things to keep in mind. By using beta versions, you may be exposing yourself to potential instability and crashes, and there is a greater chance of broken extensions. Also, reviews for the app on the Play Store will only be visible to the developer while you are a part of the program. If you choose to return to regular updates, it's as simple as re-visiting the link in Step 2 and clicking "Leave the test", and then uninstalling and re-installing DashClock. And one final note: the Play Store on the web will always show the current officially released version number while the Android client will show the beta version, but you will always get the beta regardless of which place you install from. 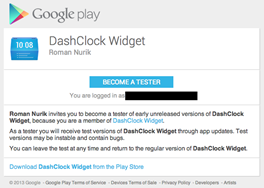 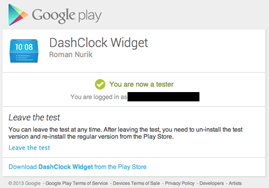 Since the beta testing feature is not yet a part of the developer console, we probably won't see very many projects following this example for a few more months. However, this is a great preview of how it will work once developers have access to open up a proper channel for testing. Update: As several commenters pointed out, the beta functionality is actually live.

If you're ready to try out some new features, go sign up to join the merry band of guinea pigs. Don't forget to be a good Samaritan and report bugs as you find them.

[Weekend Poll] Is The White Nexus 4 On Your "Want" List?