If you saw the Aurora Red version of the omnipresent Samsung Galaxy S4 yesterday and decided you just had to have it, AT&T has got you covered. Just let your fingers do the walking to the AT&T web store and get a pre-order in, and it'll be on its way in a little over two weeks. At present the $200 16GB model ($639.99 off-contract) is the only one available in a hue that matches your ruby slippers. Free standard shipping or in-store pickup is offered. 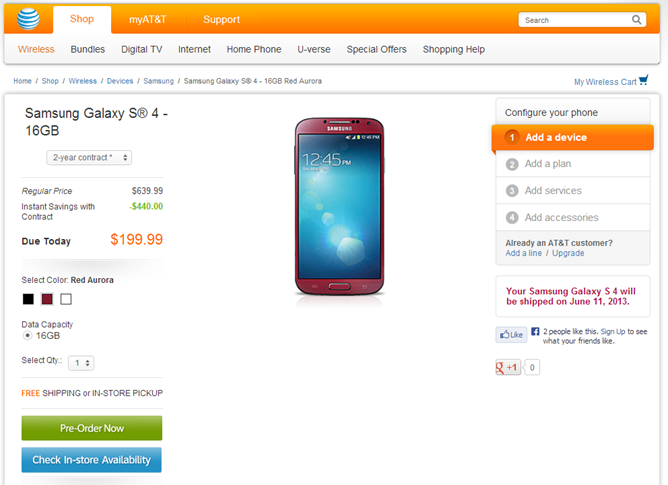 Interestingly, the AT&T store is showing the Aurora Red Galaxy S4 as coming in on Tuesday, June 11th, three days before the press release specified yesterday. Samsung's logistics department may have found a little extra get up and go, or AT&T may be projecting less demand than yesterday, or any number of variables may have caused the change. Who cares - you get your shiny superphone a bit early.

If you want more options for the Galaxy S4 and red isn't your color, you might want to wait just a little longer. Samsung has publicly stated that more colors are on the way for the S4, and American carriers in particular like to glitz it up with flagship Android phones.

HTC Crams Its Entire History Into A 2:48 Video, Proudly Concludes With The One

[For Developers] Google I/O 2013 Wrap-Up: The Must-See Sessions For Every Developer