Total Recoil looks to be a soothingly mindless action game that doesn't purport to be about anything more than shooting as many things with as many bullets from as many guns as possible. Your soldier will wield upgradable assault rifles, chain guns, cannons, missile launchers, flamethrowers, and whatever else it takes to mow down unrelenting enemy combatants. Expect your usual ground fodder to pour themselves upon you, followed by tanks, planes, and vicious boss fights. Do well, and you can call on artillery strikes and bombing runs to bring the rain down upon particularly difficult foes. 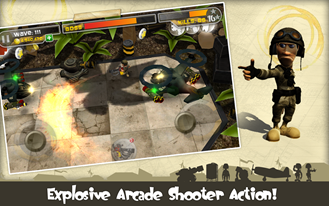 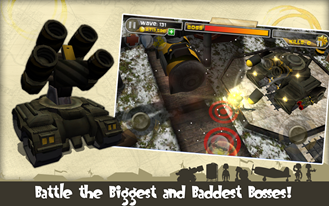 There's a plot here, sure. A global fuel crisis has placed countries at war over oil reserves controlled by just a few corporations. If this doesn't sound particularly original, that's because it shouldn't. As Thumbstar Games makes clear in the opening cutscene - this is a time for cliches.

If this sounds good, hit up the widget. All of this carnage is available for free.