The arcade-style brawler has a long and storied history. From the X-Men to Double Dragon, nothing has quite the same feel as a good button-mashing beat-em-up. The main problem with these titles on mobile devices is the lack of buttons to mash. Sure, there on on-screen thumbsticks and attack buttons, but it's just not the same. Combo Crew comes to Android in hopes of getting you (and your friends) hooked on its fluid gesture controls and slick presentation. Let's take a look at this just-released fighter.

Each stage in Combo Crew takes place in a single room with wave after wave of bad guys dropping in from above. Swipe across any of the enemies and your character will zip right over there and execute a punch or kick. Continue swiping to chain moves together and wear down the enemy's defenses. After taking some punishment, your foe might throw up a block that prevents your regular attacks from doing damage. At this point, you get to spice things up. 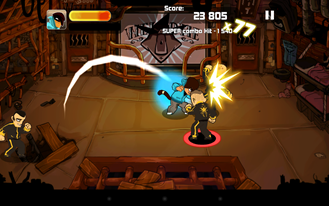 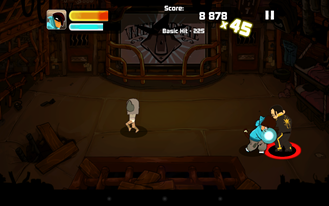 The charge attack is supremely useful in Combo Crew, and I really like how devastating it looks. Simply swipe over an enemy and hold to charge the attack, then let go. This breaks blocks, and sends the baddie back into the wall. It can also knock other attackers back, so it's great for clearing the area. While you're punching and kicking away, other enemies won't be waiting patiently for you to finish. Oh no... they will attack, but a handy exclamation point will pop up above them to alert you. Tap anywhere to counter an impending attack.

The "combo" part of Combo Crew is what ties the entire fighting experience together. Swiping with two fingers up, down, left, or right will trigger a pre-determined combo move. You can catch more than one enemy with a combo if they're close enough, but you have to be aware of your surroundings. You can't counter attacks while executing a combo, so watch your back. Keep in mind you don't ever have to worry about walking from one place to another. Simply swipe to attack, and you're there. Enough is going on that I never found Combo Crew boring or repetitive.

The top of the screen is home to a life meter and power gauge. Fill up your power by landing a ton of attacks in a row, and you get a special attack. Mash the giant button that pops up at the top of the screen and start swiping. Cross every enemy on the screen as many times as possible, then sit back at watch as your character preforms all the moves in one long combo. You get crazy points for this, and it looks awesome.

The game can be played in either King of the Tower or Combo Crew mode. King of the Tower is a single-player campaign that consists of about 40 levels in a variety of locales. Each stage has three point goals to hit, with the top prize awarding a game controller, which is one of the two forms in in-game currency. The other thing you'll get is gold, which is dropped by most vanquished foes. I felt very much compelled to get the gold medal in each level – I wanted the perfectly choreographed fight scene every time.

Controllers are used to unlock new combos and characters. The huge variety of combo moves is one of the things making this title really interesting. Any four can be equipped at a time, and you can even customize which directional swipe triggers which one. The gold you pick up goes toward the purchase of single use boosters and permanent character perks. Here's where things get interesting – you probably expect this is the part where I tell you about the in-app purchases you can use to get more currency, right? Well, there are none. You buy Combo Crew for $1.99, and there are no upsells. You earn all the in-game currency you need by playing. Bravo. 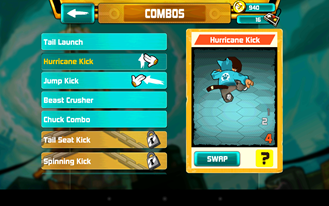 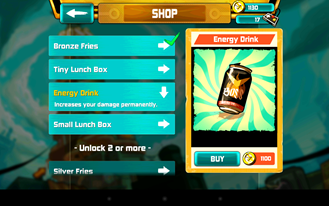 The Combo Crew mode is essentially a never ending onslaught of tough levels that will eventually wear you down. However, the farther you get, the bigger the rewards. This mode has asynchronous multi-player and it's actually rather pointless to play without friends (sorry tragic loners). Here's how it works: after burning through a few levels, you're getting low on life. When the final blow comes, Combo Crew offers to call in one of your pals for an assist. If they can successfully beat the level you were on, you're healed and can continue on. 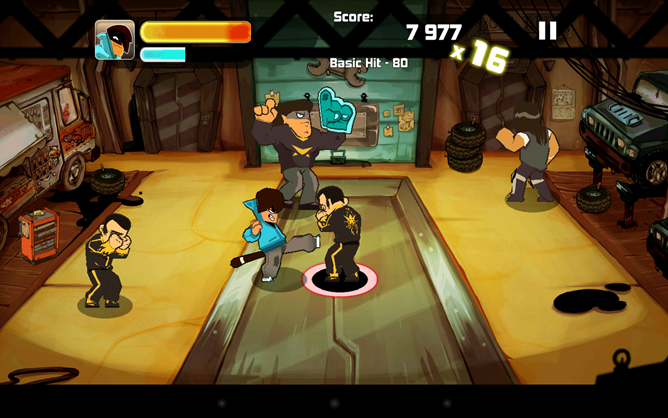 This is a good use of multiplayer, because it doesn't require your friends to drop everything and play the game with you live. The downside is that there isn't a ton of single-player content, and the Combo Crew mode is fairly frustrating without calling in help. The game uses Facebook to help you recruit friends, but you probably don't want to spam your buddies like that (I hope). Maybe ask first?

Combo Crew uses cell-shaded character models that make it looks bit like a living cartoon. The backgrounds are more detailed, but that actually makes the characters stand out in an interesting way. There's a ton of fast movements in this title, so crisp graphics are incredibly important. In the case of Combo Crew, everything is good on that front. The edges are mostly clean and free of jaggies. 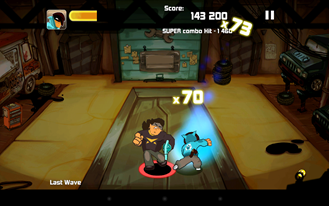 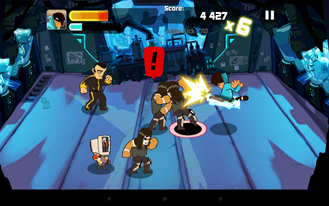 The lighting effects are a key part of the game's overall vibe. The impact glow from connected punches and your fighter zipping around make the graphics much more interesting.

As for performance, I'm quite happy with the way the game works on the Nexus 4. I had one or two hitches on the Nexus 7, but these were few and far between. There is a truly engaging kind of fluidity to the animations once you get the hang of Combo Crew's gesture controls. It reminds me of Rayman: Jungle Run in that you don't just care about winning, but about how cool you can make that victory look.

I know a lot of users are wary of getting invested in an game that promotes in-app purchases, and this is the perfect opportunity to buck that trend. It's refreshing to play a title with a strong system of in-game currency that is not balanced to push you toward spending money. Combo Crew just pushes you to play the game. 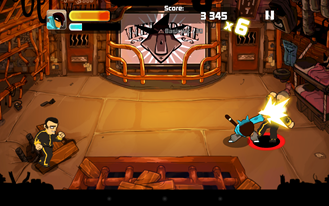 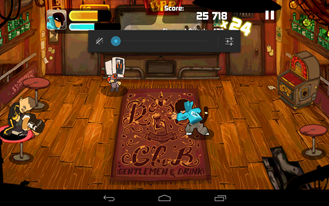 This is a really entertaining game from top to bottom. The controls are simple and show an amazing awareness of how a mobile device works. The gameplay is compelling, as long as you're willing to involve other players. Even if you want to play solo, it can be done. And the graphics? The graphics are just plain cool. Combo Crew makes good use of cell shading and has buttery animations.

You should definitely play around with Combo Crew. And why not? It's only a few dollars and won't try to sell you any bags of gold. 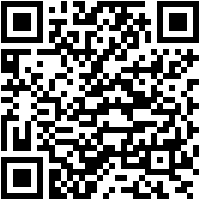