Gordon Gekko tells us that "Greed is Good," a sentiment that I happen to agree with under the circumstances. n Amazon's continuing effort to be the first place everybody turns to for their Internet purchases, the online retail giant has updated its Android Appstore to v5.0 and now supports "nearly 200" countries. Thanks to an announcement last month, we know that this expansion propels the precise count from merely 7 markets up to a shocking 195. While Amazon's list counts a few non-sovereign nations and dependent territories, the total coverage still soars well above Apple's 155 or Google's 134 (for paid apps). For laughs, I also looked up the other competitors in the mobile space to find that Windows Phone 8 now falls to 2nd place with 180 countries, and Blackberry trails slightly behind at 171. 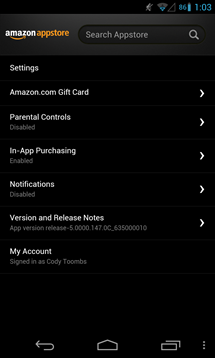 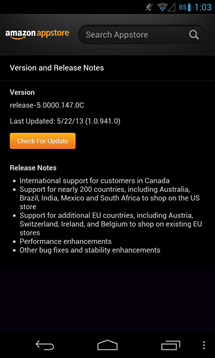 Based on the changelog, it appears that app availability will be dictated by the US store for all countries except those in the EU, which are governed by their own stores. For many locales, this will be the first time citizens will have the option to legally purchase Android apps without resorting to VPNs, hacks, or annoying licensing options.

Getting the latest version running on your device is pretty simple. Make sure you have enabled "installation of apps from unknown sources" and install the apk from amazon.com/getappstore. You can also try to check for updates from within the Amazon Appstore by going through Menu -> Settings -> Version and Release Notes, but that method doesn't seem to work for most people yet.