The ruggedized Galaxy S4 Active is real. It's been spotted on camera before, not to mention in various less dramatic leaks. The folks at MobileTechReview got their hands on one, and it looks pretty close to finished, assuming that they don't already have a production model. In the video below, you can see the tougher red chassis (probably water and dust-resistant to some degree) and physical navigation buttons, as previously featured on Samsung's Rugby models.

What's new in the video is confirmation about the guts of the S4 Active. While the Bosnian-localized unit makes it hard to verify, the narrator mentions a Snapdragon S4 Plus processor, notably less powerful than either the standard Exynos 5 octa-core or Snapdragon 600 featured on the standard Galaxy S4. It's also got a more typical 8 megapixel rear camera. Otherwise, according to MobileTechReview, the specifications are the same. 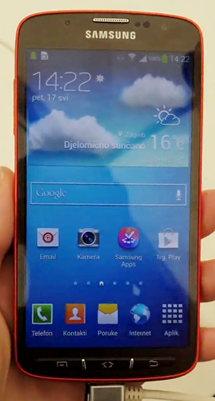 Samsung's not afraid to muddy the waters of the Galaxy brand - after all, both the Galaxy S III Mini and Galaxy S4 Mini are far less powerful than their full-sized counterparts. But for the right kind of customer, and especially those who are unnerved by Samsung's reputation for flimsy plastic bodies, the S4 Active makes sense even with slightly lowered specs. Now we just need to wait for availability and pricing. An international release is certain, but availability on American carriers is up in the air.