Well hi-diddly ho there, aspiring app developer! Has the life of a recent CompSci grad got you down? Does the world of independent mobile app programming leave something to be desired in the area of, say, ostentatious sports cars and penthouse apartments? Samsung would like to help you out with their Smart App Challenge 2013. A cool $800,000 has been reserved for the makers of ten winning apps, with 200,000 American greenbacks going to the top entrant. But don't start up your IDE just yet. 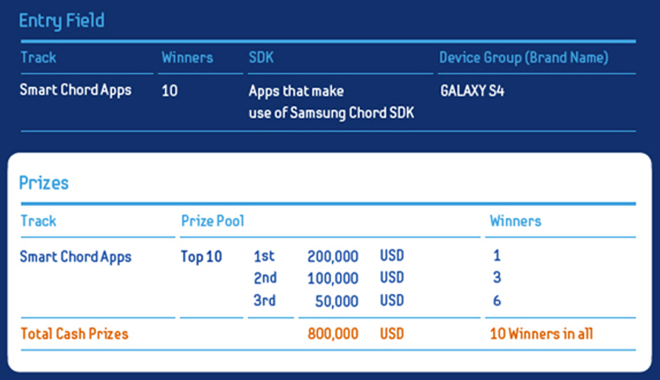 In order to qualify for any of the prizes, the apps will need to take advantage of the Chord SDK, Samsung's multi-device connection and syncing system built on the ZeroMQ library. Chord is reserved for Samsung Android devices running 4.0 or later, making the appeal of any apps created with it somewhat limited - though considering Samsung's market position at the moment, I'm sure plenty of developers can get over that fact. Samsung also wants apps to be made "for the Galaxy S4," but that guideline is a bit more nebulous. Expect the judges to be using Samsung's latest and greatest, in any case.

Apps entered into the contest must be submitted in English, sold on the proprietary Samsung Apps store, and any advertising or in-app purchases must also use Samsung's APIs. All ten winners will receive a free Galaxy S4 (natch), with the top entrant scoring $200,000, three second prize winners earning $100,000 each, and six third prize winners getting $50,000 each. Winners will also get "a variety of promotional benefits through Samsung’s global channels [and] they will be given a chance also to be pitched their app to Samsung Venture Investment just after the ceremony for the winners." So, there's at least the possibility for some VC funds.

For our international readers, the contest appears to be open to absolutely anyone. You'll need to register on the Smart App Challenge website, then submit your apps for consideration to both the contest and the Samsung Apps platform sometime between June 20th and August 31st. Winners will be announced in December. Good luck, developers - and remember, if the prize money doesn't pan out, you can always change things around to work with the Google Play Games API and try your luck on the Play Store.