AT&T has long had a chip on its shoulder when it comes to video chat apps running on its network. It took a few years to enable Apple's solution, but Android users were stymied just last week when the new Hangouts app refused to connect to video calls over AT&T's 3G and 4G. The rationale the carrier is using to justify its decision is incredibly convoluted, to say the least. However, things are going to change in the second half of 2013. 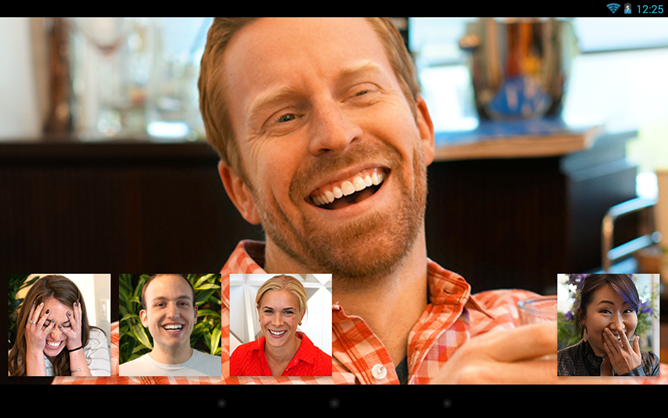 AT&T makes a bizarre distinction between apps that are downloaded, and those that are included on the phone. Hangouts replaces Talk, so even though it's new to Google Play, AT&T considers it a pre-installed app. Any company with a pre-installed video chat app is required to get AT&T approval for its use over cellular connections because the carrier believes people are more likely to use them. Sound weird? Well, the new policy thankfully loosens restrictions.

For video chat apps that come pre-loaded on devices, we currently give all OS and device makers the ability for those apps to work over cellular for our customers who are on Mobile Share or Tiered plans. Apple, Samsung and BlackBerry have chosen to enable this for their pre-loaded video chat apps. And by mid-June, we’ll have enabled those apps over cellular for our unlimited plan customers who have LTE devices from those three manufacturers.

Throughout the second half of this year, we plan to enable pre-loaded video chat apps over cellular for all our customers, regardless of data plan or device; that work is expected to be complete by year end.

Today, all of our customers can use any mobile video chat app that they download from the Internet, such as Skype.

So the upshot of this change is that Hangouts video will work on Android by the end of the year, as will other video chat apps. Additionally, unlimited users will have the option to burn through bits doing video chats on approved devices sometime in June. It's not clear what hand, if any, Google had in this change.

ShaqDown Available For Free For A Limited Time, Though We're Not Sure How It Will Become Paid Again