When a stereotypical madman has access to some conveniently forgotten nuclear weapons, the only thing that can stop him is a flying tank. There is probably no other game in which that sentence makes a lick of sense, but it's the basic premise behind Fire and Forget: Final Assault.

This is an arcade-style action game based on the classic franchise. In this title you must blast your way through waves of bad guys in a post-apocalyptic wasteland to reach Captain Nucleo's nuclear-equipped hovercraft. It certainly sounds like it has all the makings of a killer experience, but is it?

Each of the 10 stages consist of your car, the Thunder Master III, rocketing down the highway in pursuit of Captain Nucleo. You will come up on various enemy vehicles from behind, many of which will open fire to slow you down and presumably give the captain time to escape. You aren't required to take out all the enemies, but it's certainly more fun to try.

Also scattered around the road are mines, obstacles, and lots of power-ups. It's important to watch the Thunder Master III's life in the upper right corner – the car takes damage from running into all those mines and debris. The game often forces you to decide which power-ups you're going to aim for. If the damage meter is getting too high, it's smart to grab the life instead of more missiles.

Unlike many games on Android, there is not much you can do change the controls in Fire and Forget. This is ostensibly a driving game, but it's more about shooting while not crashing – you don't even have control of the throttle. Steering is handled via the accelerometer, which I'm often not a big fan of. This method of control can be especially tiresome on larger tablets. The turning sensitivity is adjustable, but I feel like it is overall a little too "squirrely" for my tastes. Small movements seem prone to kicking the vehicle into walls randomly.

The weapons on Thunder Master III are handled by two buttons on the right of the screen. Tap or long-press the crosshair button to fire the carbine laser, and long-press the missile button to acquire a target and release to fire. On the other side of the screen is the flight button, which really makes this game more interesting.

When the vehicle lifts off, you can again use the accelerometer to steer, but the craft can move up and down in addition to left and right. Fire and Forget uses airplane-style directions, which I prefer. You tilt the top of the device back to dive, and do the opposite to pull up. There's no option to reverse the controls if this isn't your preferred setup, though. 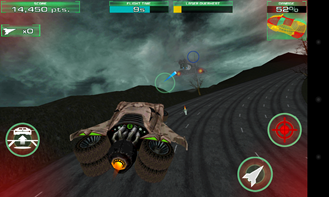 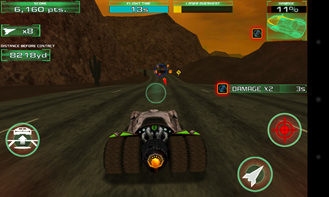 I like that the game uses auto aim, as it would be very difficult to drive and aim a weapon at the same time. Missiles are limited, but ammo is spread around the course. Carbine ammo is unlimited, but it can overheat if you fire continuously. Flight time is also unlimited, but you can only use it for about 13 seconds at a time before landing to allow it to regenerate. The flying ability helps you avoid those nasty mines and dodge enemy fire. It's probably the most enjoyable aspect of Fire and Forget, as well.

Fire and Forget is a new take on a classic game, but the intention was not to use retro graphics. This is a fully 3D environment, but it looks rather bland overall. Most of the levels are more or less interchangeable stretches of roads, ruined cities, and tunnels. The color palette and time of day do change, though.

The texture resolution isn't particularly high, but you aren't often close enough to anything for it to be a major annoyance. The Thunder Master III itself looks very cool. Lighting effects make up a bit for the muddy textures, and edges are mostly free of aliasing. 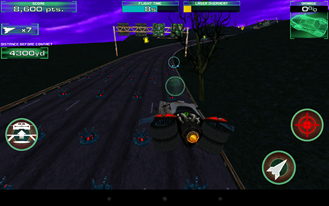 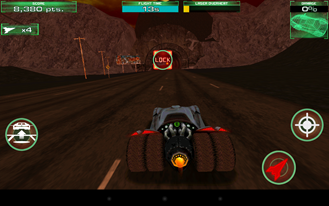 Fire and Forget is pretty, but it's not stunning or anything. With that in mind, I'm surprised the game feels as "heavy" as it does. On the Nexus 7, Fire and Forget seems to be at the very edge of playability with default graphics. It will run fine at first, but every few minutes the steering gets unresponsive and the frame rate drops.

On the Nexus 4, things are much better. I see almost no slowdowns on that device with its Snapdragon S4 Pro, even if I turn the quality level up. I believe this option increases the texture resolution, making the environment more crisp. The bottom line here: the graphics are good if your device is packing solid specs, but performance needs some tweaking.

Fire and Forget: Final Assault is $1.99 in Google Play. That's certainly not going to break the bank, and I'm very happy to not see any in-app purchases. That said, the levels only take about 5-6 minutes to beat, and with only 10 of them that's potentially less than an hour of gameplay. There is a 2-player mode, but all it consists of is playing the same level on two different devices and comparing scores at the end. It doesn't help that there are almost no online players right now (I had to fire up a second device to get a match going). 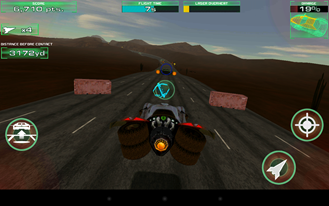 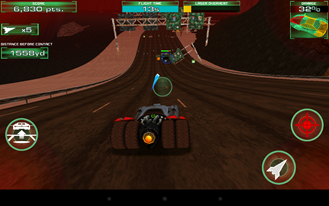 Fire and Forget is fun, but there isn't quite enough gameplay for me to solidly recommend it. The lack of content and mediocre performance make this a buyer beware game in my book. If you have a fast device and like this kind of title, then buy it and enjoy those 10 levels.