There is no arguing that the new Hangouts Android app, which replaces Google Talk and aims to unify several communication methods, has had a rough start. One of the main issues we've run into from the very beginning was wonky tablet support. In fact, most people couldn't install it at all because instead of the Update button, only a lone "Open" button would show up on tablets. Dan Morrill, one of our favorite Android engineers (HOLOYOLO! No really, he yelled that at yesterday's Android Fireside Chat), has explained that this happened due to an unfortunate bug with telephony-related permissions, and that a fix would be rolling out shortly.

With this morning's changelog-less Hangouts update to v1.0.1.678536, the tablet compatibility seems to be fixed, and the new app can now replace the old Google Talk (I'll miss you, trusty Talk). You can head over to the Play Store on your tablet or just methodically push it straight from the web to all your tablets one by one (especially if your Play Store app doesn't see the new update or the Update button yet for some reason). 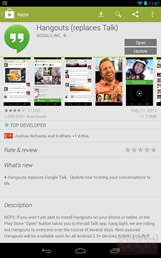 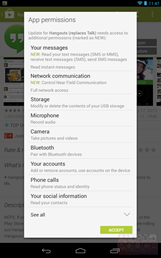 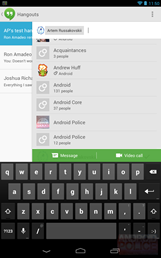 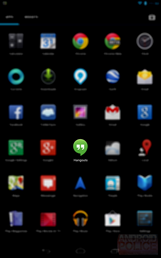 With one issue crossed off the list, the Hangouts team will have its hands full for quite some time. Google+ Messenger integration and Gmail web UI are on the horizon, but Voice/SMS integration, setting your status, text formatting, swiping between conversations, and other much desired features are yet to be seen.

Google Play Games Feature Badges For Multiplayer, Achievements, And Leaderboards Rolling Out In ...