It's been barely 48 hours since Google's brand new Play Games management system went online, and already dozens of high-profile games have been updated to include its features. But how do you tell which titles use Play Games and which don't when browsing the Play Store (without, you know, actually reading the descriptions)? The big G has you covered. Badges for the various features of Google Play Games are now automatically appearing in the relevant Play Store pages. 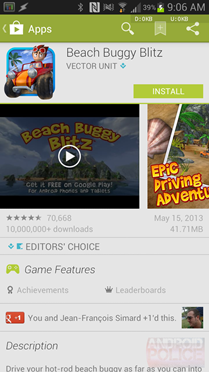 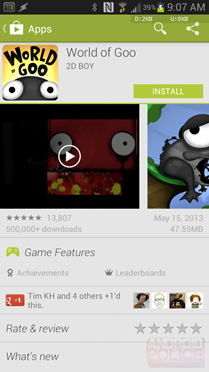 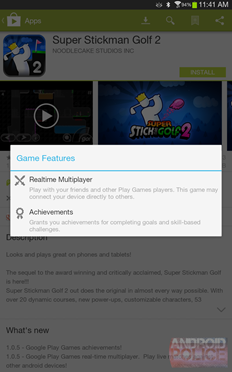 App tearer-downer extraordinaire Ron Amadeo spotted this feature in his leak teardown, though the lower right corner badge doesn't seem to be implemented yet. Some of the Play Games-enabled titles currently show the badges, and some don't, so it doesn't appear to be an instantaneous rollout. I'd expect it to take a few more days for Google to re-index a few hundred thousand apps. For example, the paid version of World of Goo currently shows the Game Features badges for achievements and leaderboards, while the free demo version does not. Likewise for Vector Unit's Beach Buggy Blitz and Shine Runner, respectively. To see the Features badge, you'll need to be running the latest version of the Google Play vending APK. For the time being, the web version of the Play Store don't need no stinkin' badges.

So far, we're seeing icons and short descriptions for Realtime Multiplayer, Achievements, and Leaderboards. (Cloud saves might be there too, we just haven't spotted any games with the badge yet.) Remember that developers can pick and choose which features they want to add, so "Google Play Games Support" may include some or all of them - for example, Gameloft's Modern Combat 4 has achievements and leaderboards, but relies on its own servers for multiplayer.

PSA: The New Hangouts App Should Now Work On All Android Tablets - Go Grab Your Update And ...