The Galaxy S4 is a beast of a phone, and very likely to be the best-selling Android device in the world this year. It's also pretty bloated when it comes to software: on a brand new, unsullied phone, more than 6GB of internal storage is taken up by Samsung's TouchWiz version of Android. Most markets don't yet have access to a 32GB or 64GB model, and the base 16GB version has less than 10GB of user-accessible storage available. After a less than flattering feature on the BBC consumer protection show WatchDog, Samsung gave the following statement to CNET UK:

"We appreciate this issue being raised and we will improve our communications. Also, we are reviewing the possibility to secure more memory space through further software optimisation. Samsung is committed to listening to our customers and responding to their needs as part of our innovation process."

Take note of the complete lack of commitment in that statement. It's important.

Samsung's reply to CNET is certainly mostly inspired by the BBC's investigation, but it might also have something to do with the fact that Google announced a Nexus-style S4 yesterday at Google I/O. The Galaxy S4 Google Edition will come with a completely stock version of Android 4.2, giving us a direct comparison with TouchWiz on the same hardware. Of course, we don't know how much or how little space the software on the Google Edition will take, but on similar Nexus devices, the System partition is generally much more trim. 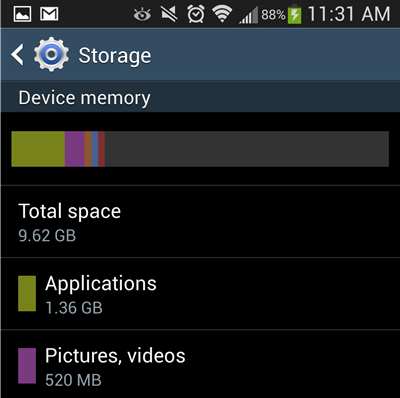 Samsung and its fans have generally countered that since nearly all its devices have a MicroSD card slot, a lack of local storage is compensated for with expandable cards. But since Google decided to nix moving apps to the MicroSD card in Android 4.1, we're right back to the regrettable situation of relying on on-board storage for all apps, and most non-media content. Improving communications, as Samsung puts it, probably doesn't entail more that a disclaimer on retail packaging, much like hard drives have had for a while now.

With high-definition video and massive games becoming commonplace, power users are starting to demand at least 32GB of internal storage. Samsung really needs to trim the fat in TouchWiz, or start offering more capacious models on day one. Preferably both. Unfortunately, the company has only committed to "reviewing the possibility" at this point, which (if you'll pardon my cynicism) could mean a whole lot of nothing.