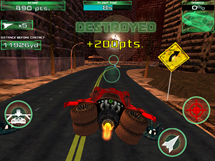 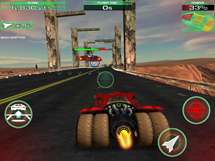 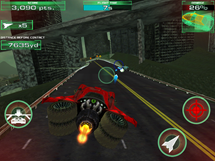 Yes, not only can you shoot terrorists in a post-apocalyptic nuclear wasteland, you can do it from a flying car. It's like the best parts of Mad Max and Back to the Future II fused together. While heading down the highway, you can shoot lasers infinitely, but your guided missiles (that's the "fire and forget" portion of the game) are limited. Tap and hold the missile button for a lock and let it go. At any point you can tap the "fly" button and your car raises into the air to avoid obstacles on the ground. But watch the meter - flight time is limited to a few seconds before you'll have to land and recharge.

The only footage we could find from the game is for the PC version. Imagine this, with fewer polygons and effects, and it's basically the same as the Android game.

Each of the ten levels is riddled with hazards, enemies, health and ammo refills, and a final boss, which you are encouraged to shoot for points in classic video game fashion. Multiplayer is included. The story and music are right out of the 80s, and there are a few upgrades, but they seem mostly cosmetic. Graphics are squarely in the Dreamcast area; not outstanding, but functional, and the game should run on just about anything made in the last couple of years. A cursory glance reveals no in-app purchases - two dollars American gets you the whole thing.

Hangouts Hangover: Here Are The Major Issues Google Has Promised To Fix In Hangouts... At Some Point

Simple And GoBank: A Closer Look At The Future Of Banking In The Cloud