Google made a big deal out of its improvements to the Play Store in the massive keynote that kicked off I/O, and at least some of them are live right now. Probably the most important for tablet owners is the ability to highlight apps specifically designed for tablets, or at least, the ones that have given some thought to layout and interface on larger screens. The updated tablet view is being rolled out right now, and on at least some devices (read:mine) it includes the option to filter out the smartphone chaff from the tablet wheat. 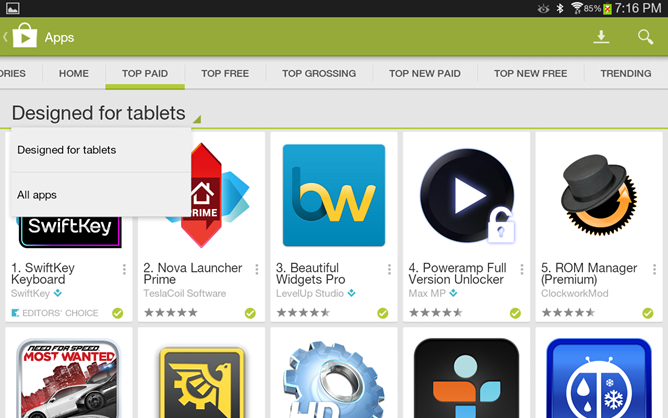 If you want to see it, make sure your tablet is running the latest build of the Google Play Store (4.1.6 - download it here) and tap the Apps link on the front page. Slide over to the "Top Paid" tab, or any of the main tabs in the Play Store. Then tap the somewhat innocuous "All apps" text, and select "Designed for tablets" instead. Bingo, you're now presented with nothing but the finest tablet apps that Android has to offer. Sadly, this does not work in a general search.

But hang on, dear readers. A few of these apps' claim to the "Designed for tablets" badge seems suspect at best. Right there at the top of the Paid list today is SwiftKey (currently on sale) when it should definitely not be, since there's a tablet-specific version of the keyboard. Scroll down a bit and you'll see EA's Tetris Free, which looks like crap even on the 720p screen of my Galaxy Note 8.0. There's even ROM Manager Premium, which is barely even an app, it's just the unlock enabler for ROM Manager (which doesn't have a tablet user interface either). Switching to the tablet filter definitely narrows the field, but not by nearly enough. "Designed for tablets" might be more accurately labeled "Eh, it will probably run on your tablet" for the time being. 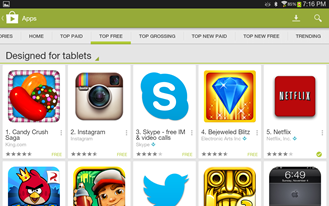 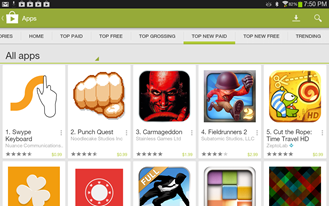 We get that this is early days, but the fact remains that it's very hard to find good, tablet-specific or tablet-enhanced apps on the Play Store. Hopefully someone in Mountain View will sort through this sooner rather than later. One last thing: the "Designed for tablets" function is not to be confused with the curated/featured tablet apps, often embedded in a link on the front page of the Play Store. Those have been there for a while, and they're not dynamically generated.

Google Play Games Is Live, And Here Is A List Of Games That Already Support It