Hey HP, we know you're new to the Android game, so here's a tip: if you've got a hot new piece of hardware, the absolute worst time to announce it is a few hours before Google I/O. That said, the new SlateBook x2 might garner some interest thanks to its internals alone - it's one of the first devices after NVIDIA's own Shield to use the Tegra 4 SoC. Throw in a 10.1-inch 1920x1200 screen and a very familiar-looking keyboard dock, and you've got the makings of a serious competitor. Well, you might, if it weren't for the high price tag and cheap-looking build. 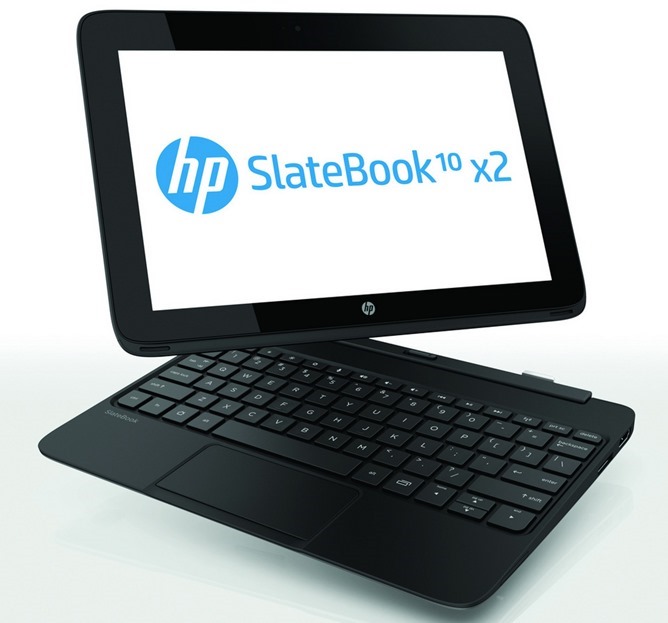 The SlateBook x2 doesn't just look like an ASUS Transformer, it apes a lot of the core functionality, with batteries in both the tablet and the dock. HP isn't saying how long either will last. The dock adds two USB ports and a full-sized SD card reader in addition to the MicroSD slot on the tablet itself. It looks like the multitouch trackpad is more comfortable than the one found on ASUS' models. I wish that I could say the same for the rest of the unit, but it seems chunky, with an over-reliance on plastic. As one Android Police editor mentioned in the office, it looks like someone threw Android on a low-end netbook. HP says that the SlateBook x2 has "64 MB" of storage, which we assume is a typo meant to indicate 64 gigabytes.

At least there's something to love in the software. The tablet will run Android 4.2.2 out of the box, and it'll be mostly stock to boot, with the exception of some HP and NVIDIA goodies thrown in. The SlateBook x2 will be available in August in the US for $479.99. HP hasn't explicitly stated that the keyboard dock is included in the price, but based on the PR, we're assuming that it is.

PALO ALTO, Calif., May 15, 2013 — HP today announced the HP SlateBook x2 and the HP Split x2, two detachable PCs that offer the full functionality of a notebook with a removable screen that also is a sleek tablet.

The HP SlateBook x2 enables users to shift effortlessly from entertainment to work by combining tablet portability with notebook productivity in a sleek, lightweight device that uses the popular Android operating system. With an advanced magnetic hinge design and dual battery system—one battery in the base and one in the tablet—users can easily switch from notebook to tablet and back, even while on the go.

The HP SlateBook x2 and HP Split x2 are expected to be available in the United States in August with starting prices of $479.99 and $799.99, respectively.