Zact is a brand new Mobile Virtual Network Operator (MVNO) that might just change the way you think about cell phone providers. Its unique approach is built on software provided by parent company ItsOn, and enabled with a mix of Android hardware and proprietary services. The result is unlike anything else available at the moment. With a completely customizable selection of voice, text, and data features, a la cart app-based data, and unprecedented sharing and parental controls, Zact might just be the perfect phone service... at least for those who fit into some admittedly specialized situations. Zact service is scheduled to go live in June, but the company gave us a quick look at what makes it different from other cell phone providers. We came away more than a little impressed.

Zact service is based on a contract-free (but not prepaid) system. You buy one or more compatible Android phones, select your service features, and use them. The interesting part is hidden in the service selection. Zact users can select how many minutes, how many SMS messages, and how much data they want to use, and they can be selected independently of one another. There are some phone companies that already do this, but here's the kicker: you can choose how much or how little of each you want to an insane degree, and you can change your usage level mid-month. If you know you'll be using more voice minutes this week due to a business trip, you can bump up your personal limit. 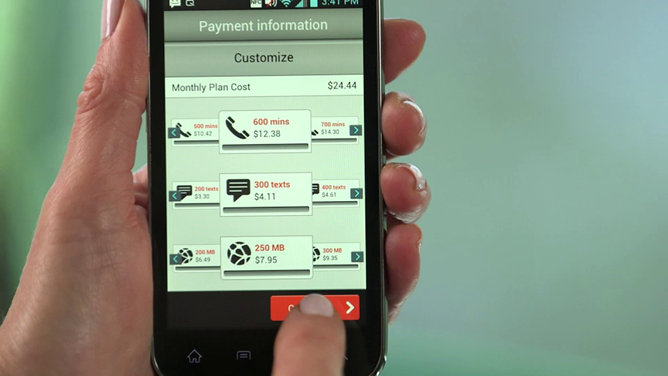 You don't need anything more than your phone to do this, either - ItsOn's proprietary system lets you adjust minutes, texts, and data on the fly, via the app included on the Zact phone. No calling in to customer service, no logging in to a website, just adjust the slider and you're good to go. There are never, ever any overage fees - when you're approaching your set limit of usage, the app alerts you, and allows you to bump up on the fly. If you choose not to pay more, your minutes/messages/data stop, instead of charging overages. Even better, if you selected more voice, text or data than you actually used, Zact will automatically bump you down to the lowest available tier of service and credit your account with the difference. If you've only used half of what you've paid for, and your usage remains consistent over the next billing cycle, it's on the house. This is an amazingly customer-focused way of running a cell phone company. 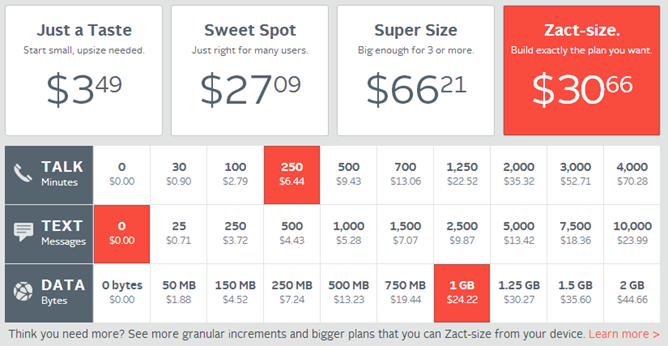 Speaking of charges: the way that Zact works makes for some incredibly cheap plans in the right circumstances. For someone who uses the mobile network sparsely, and sets their voice usage to 200 minutes a month, texts to 50, and data to 200MB, their monthly phone bill would be around $7. Frugal users can completely disable any of the three services. Even scaled up to the standard plans that most national carriers push to their customers, the service is impressively cheap, with the notable exception of data.

Customers can buy data in the standard way, as mentioned above. But they can also buy data packages on a per-app basis, something that's never really been done before. "All you can eat" add-ons are as cheap as $2.50 per app. So if you're a user whose only real mobile Internet use is Facebook and emailing, you can set those apps to use as much data as they need, and throw in another 100MB for general use. For the right kind of user, this has the potential to save even more money, though we emphasize that these per-app plans are completely optional. At launch packages for standard apps will be available. Video will get its own option at some point, though it's unlikely to be unlimited. 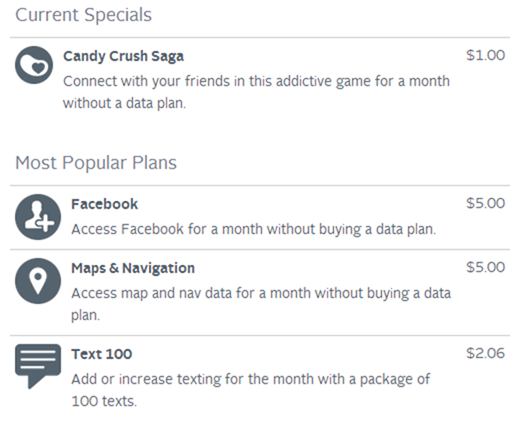 Calling to international countries can be added in the same a la carte manner. If you've got family or business contacts in Spain, you won't need to buy a full worldwide or European package - just add minutes for Spain, and you're good to go. More than seventy countries, including Mexico, Canada, China, and most of Europe and South America, will be available at launch.

The MVNO will use Sprint's service as a backbone, like most of them seem to do these days. But unlike some other providers, Zact will have access to Sprint's LTE network as well. In addition, company representatives say that they've created a more aggressive roaming function. Roaming is free (like pretty much every US cell phone plan) but Zact phones will switch to Sprint's extended roaming network more readily than standard Sprint phones. So, if you're in an area that has "one bar" of Sprint signal (which, admittedly, is a pretty big swath of the US), Zact phones will switch to another available network, while regular Sprint phones might stay on the non-roaming network until there is no other alternative.

Because we knew someone would want to know, we asked Zact representatives about tethering. It's completely OK with the service, and there won't be an additional fee. Users are free to use the data piped into their phones to its technical limit.

The Zact service uses the most direct sharing/family system we've ever seen. Any compatible phone can be added to any family or group plan at any time - all you need to do is "pair" it to a primary phone, not unlike a Bluetooth connection. Additional lines are $5 a month, a bargain, and all voice minutes, texts, and data is shared between all paired phones. But it isn't just a simple pool system, like with most major carriers. Customers can select which phones are allocated how much of the total service. For example, a husband and wife could give one spouse 80% of available voice minutes and texts, while the other gets 90% of the data. 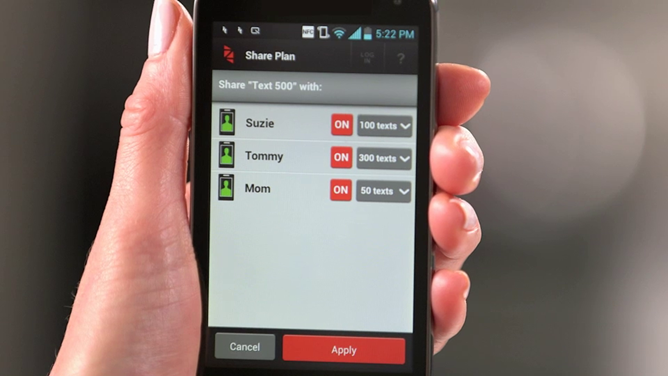 There are no restrictions on how many or how few phones can be paired to a single master account. In another consumer-friendly move, phones can be added or removed with no penalties. If you won't be using a line for a few months, take it off to save a few bucks. The $5 a month per-line service charge reserves a unique phone number, but it's possible to allocate 0% of service to that line to keep it active, if that's what you need. Percentages can be adjusted from an administrator phone at any time.

The parental/administrator controls in the ItsOn software may be the most important feature for some users. (This feature would work great for small businesses as well, but Zact is focusing on the parental angle at the moment.) When you connect a new phone to the service, you designate it as an administrator or a standard user, not unlike a desktop computer. In addition to the service sharing functions mentions above, administrator phones can control a staggering amount of access options. 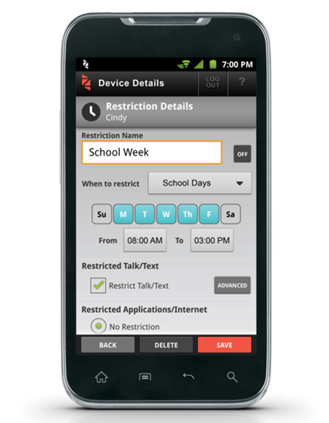 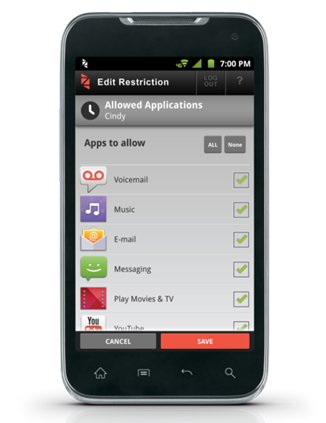 First comes the curfew settings. You can keep your kids from calling and/or texting during certain hours, on a weekly schedule - say, during school hours and when they should be sleeping. Even better, you can select which individual apps will be available, either turning them off completely or restricting their use to certain hours. A whitelist or blacklist can be applied when specifying individual apps.

Again, this is all handled remotely through an administrator phone. You never have to touch the other devices once they're paired. The parental restrictions work over the cellular network and WiFi.

Aside from the obvious restriction to Sprint's network (which isn't likely to change any time soon), Zact will launch with just two disappointing phones: the LG Viper 4G LTE (which runs Ice Cream Sandwich) and the LG Optimus Elite (which doesn't). They come in at $399 and $199 respectively, and are only offered via no-contract, unsubsidized plans. The service is open today for pre-orders via Zact.com, with an expected launch date in June. 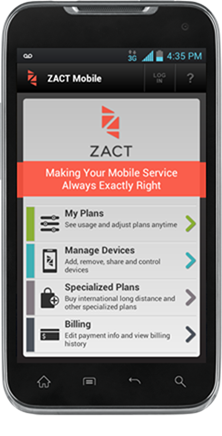 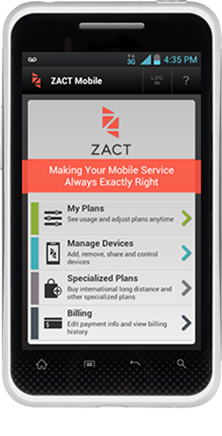 Data on Zact can get very expensive if you want access to the same amounts that are currently offered on national networks. During our brief time with the service, we saw that 4GB of data costs $85, and remember, that's in addition to voice and text, and shared with your entire device pool. All of this is subject to change, but it looks like Zact won't be a legitimate option for data-hungry users, or those who want the latest and greatest smartphones... at least for the moment.

Due to the proprietary services from ItsOn, customers won't be able to bring unlocked phones to Zact, even if they use hardware from Sprint or another MVNO. We specifically asked about rooting and custom ROMs for power users. Representatives said that they wouldn't actively stop customers from doing either, but would not guarantee that a modified phone would work with the service. Based on our time with Zact, we'd say that root and other basic modifications will probably work, but custom ROMs (at least those that are based on AOSP and the like) are out.

ItsOn believes that its system is the future of cell phone service, and based on just a little time with Zact, we are optimistic. The company hopes to license its technology to other providers, opening the doors for a wider set of users. The Zact company and service is, more or less, a proof of concept. Though it's unlikely that the Big Four are eager to offer customers these kinds of money-saving options at the moment, there's at least some hope: Verizon, Vodafone, and Best Buy are among the small company's initial investors.

For the immediate future, Zact hopes to add more powerful phones to its lineup within the year. Though they couldn't tell us specifics, company representatives mentioned that they were talking to "at least three" notable manufacturers. They also plan to release tablets, which can be paired like any other device.

At this point, Zact looks like an amazingly innovative solution for some people, and a wish list of features for others. The shared plans and parental controls are nothing short of astounding, but the Sprint backbone, limitations on data, and a poor initial selection of devices means that power users and frequent travelers will probably need to look elsewhere. Even so, we hope that the innovative features (particularly the pay-what-you-want pricing) make their way to other providers soon.

Sony Announces The Xperia ZR: A Tougher, More Waterproof Version Of The Xperia Z (Without The ...