Sometimes you have to assume that there are entire teams at Google whose sole job is to think up fodder for nostalgic technology bloggers. Case in point: for the 37th anniversary of the classic arcade game Breakout, Google has thrown together another one of its elaborate Easter eggs. Do a Google Image Search for "atari breakout", and the results will turn into the smashable blocks, with your mouse working as a control for the paddle. It even works on Android, assuming you use a compatible browser in desktop mode. 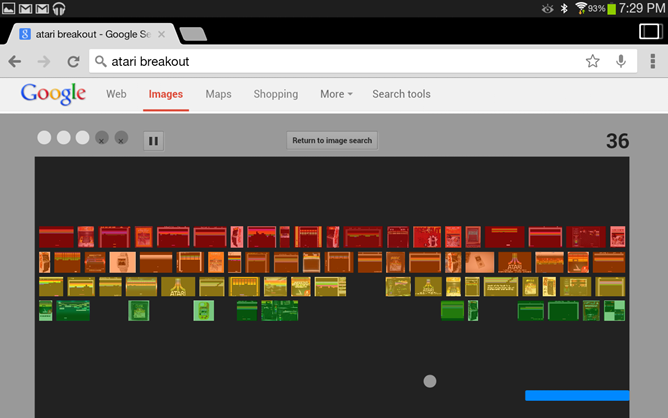 Interestingly, the prototype version for the original 1976 Breakout hardware was designed with help from Apple's future dynamic duo, Steve Jobs and Steve Wozniak. Wozniak completed the hardware design on time and using fewer components than the specification called for, earning a sizeable bonus. (Jobs failed to mention this to him, and pocketed the cash.) Though Wozniak's design was abandoned by Atari for a less complex but more expensive permutation, Breakout holds a place in history as one of the first collaborations between the two men.

If you're having trouble playing the browser version of Breakout on Android, try tapping the screen instead of sliding across it. Strangely, Chrome for Android seems to perform poorly with Image Search Breakout; Artem had more luck with Dolphin Browser, which ran the game like a champ. At least that's what he tells us - he's been locked in his office for the last three hours, working on important editorial things to the sound of beeps and boops.