I was seven years old when Carmageddon first hit store shelves in 1997. Even if the game hadn't been widely banned and censored around the world, I still wouldn't have gotten my hands on it. The off-the-wall violence and bloodshed would have been a bit too much for my parents to permit me to play with good conscience. While leagues of long-time fans poured money into the Kickstarter campaign that allowed Stainless Games to port the game to Android in the first place, I am visiting the game for the first time. Thank you, Kickstarters, for giving me the chance. To anyone considering giving Carmageddon a try - don't think, just buy. It's $2 well spent.

Carmageddon plays like a Destruction Derby game where jumping the fence and running over the audience is fair game. It's what you get if you take Grand Theft Auto and strip out the guns. It resembles a zombie apocalypse where cars, not zombies, are the reason it sucks to still be alive. To cut a long story short, it's a pretty awesome game. 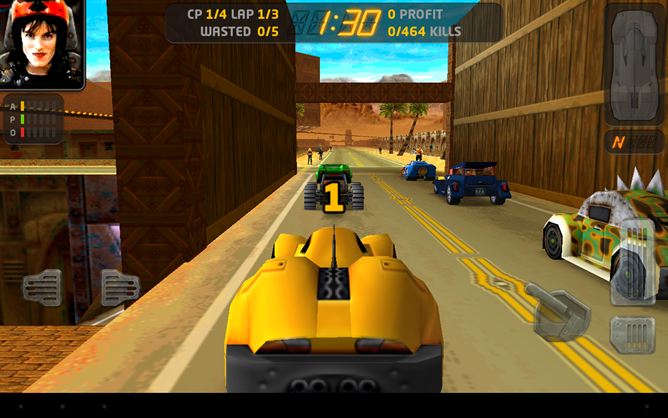 The maim of the game is simple: each race can be won by driving through all of the checkpoints for a set number of laps, destroying the opposing racers, or killing all of the pedestrians on the map. If your time runs out, you lose the race. Time can be gained by running over pedestrians and smashing into opponents. Thanks to this dynamic, the clock generally won't run out if you choose to ignore the race entirely and turn it into an all-out brawl. Depending on which car you select and the track you're on, it's no more or less difficult to win by fighting than racing. Yet regardless of what your circumstances are, killing all of the pedestrians is tough. They're everywhere, and they have an annoying habit of moving out of the way when you try to run over them. 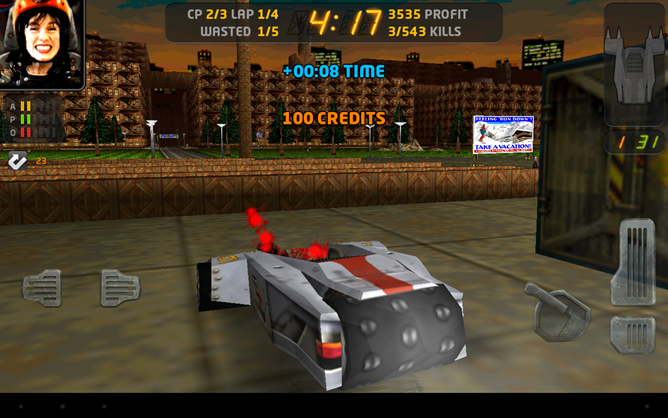 As with any racing game, repetition is a problem. Carmageddon combats this by providing you with whopping 36 tracks and 30 cars. Reaching higher ranks allows you to unlock harder stages, and cars can be unlocked by "stealing" them (destroying them in races where they're marked as steal-worthy). Expect to make a sizable time commitment if you plan to unlock everything the old-fashioned way. If that's not your style, you can purchase all of the cars in-game for 99 cents. All of the maps can be purchased for the same price. Together, the car and map packs reduce the time needed to unlock most of the game's content to just a couple of clicks. 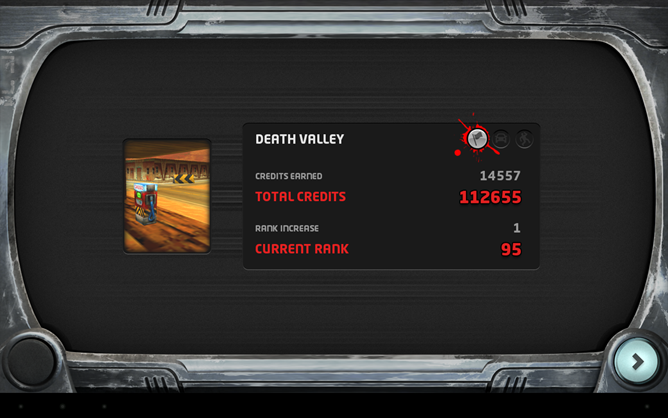 Carmageddon is controlled via virtual buttons, and they work well enough. What frustrates me is the game's physics. It is so easy to turn too sharply or not turn sharp enough, and while I appreciate there being a certain level of skill required to navigate a track, backing up and driving around the pole I ran into shouldn't take me three tries. I've played a lot of racing games, and while I may have never been particularly stellar, I generally feel confident I could navigate a car through a basic driver's ed course. With Carmageddon's physics, no way. It's almost like they want you to crash. Wait... 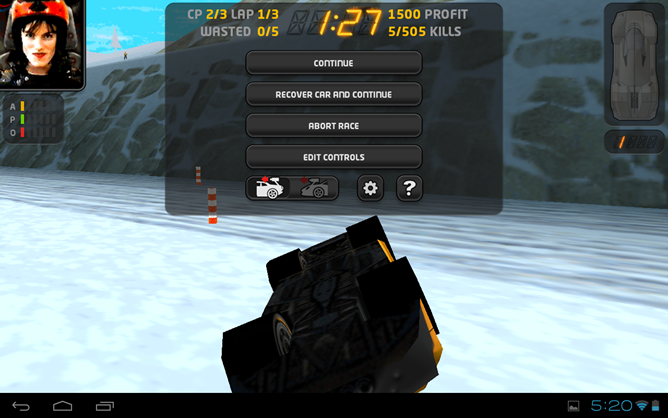 As you abuse your car throughout a race, the damage will be visible. Smoke with start to rise from under your hood, and if you're not too careful, the next collision will turn that smoke into fire. Your car's performance drops as you take damage, but you can issue repairs at any time by sacrificing some of your profit. Even after your car is totaled you can still drop enough prize money to get you back into the race, assuming you have enough.

Carmageddon looks like a 90s game. This is a straight port, so don't expect to be blown away. The cars and tracks are three dimensional, but the pedestrians and pick-ups consist of pixelated sprites. When you run over that umpteenth cow, it will burst into blood and crumple into a rotating corpse reminiscent of the original Doom. 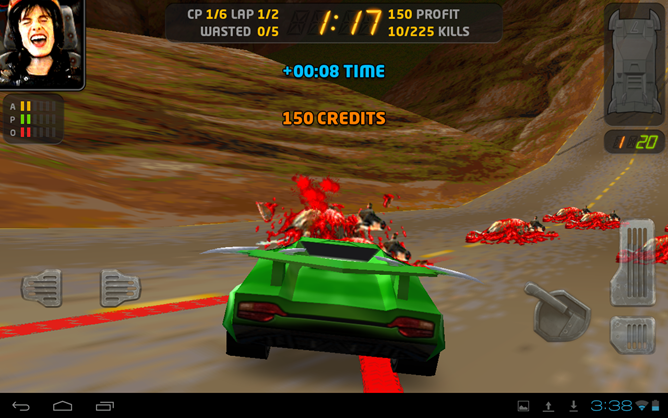 Short videos play after races that change depending on your performance, but they are a fuzzy mess. I'm almost glad I wasn't playing this game on a Nexus 10, for it would be a shame to waste such a gorgeous display on footage so grainy.  But if you're playing this on a smartphone, you may be better able to appreciate the bite-sized humor contained in each video.

The music is largely forgettable, but the sound effects add to the experience. Bystanders will scream, tires will screech, and your driver will cheer with joy as he or she launches across a gap in a broken bridge or plummets into a river. 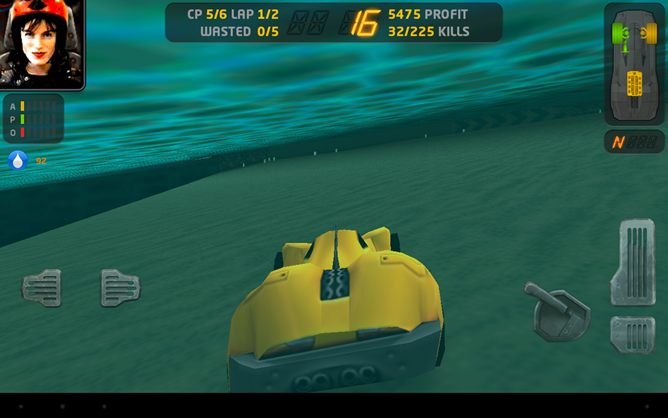 There's also an abundance of swearing. If you have sensitive ears or little kids nearby, you might not want to play with the volume up. You're not missing out on too much. I personally preferred to keep the sound low despite the quality of the sounds.

Carmageddon is bloody. Make no mistake: it lives up to every bit of its name. You will mow down entire teams of football players and hallways filled with scientists. You may choose to ignore pedestrians every now and then, but there will be times when you cannot afford to go another lap without stopping to plow into a dozen or so people. If you cannot stomach this premise, then you should skip over this game. There's no ignoring what Carmageddon is all about.

But if you've been playing games long enough to have already shed your moral fiber, you owe it to yourself to experience this piece of gaming history. The tracks and the cars are among the most diverse I have seen in a racing game, with each car handling differently and each track requiring a different racing style than the one before. There's no plot here or extensive cutscenes to distract you from racing. This game soars on the merits of its solid design. Verizon Moves Up Samsung Galaxy S4 Launch To May 23rd