Of course after our app roundup earlier today, we've got to have a roundup of the very best games from last month. This time we have a few more than usual, bumping the count to eight. While our shortlist isn't so short this time around, all the games discussed are well worth checking out. From racing to hidden object, April 2013 had something for just about every type of gamer.

First up is CSR Racing. If you sense a lack of super-shiny racing games on Android, CSR Racing by NaturalMotionGames will fill the gap. Check out the promo video, which itself is as fast as the racing.

The game offers players plenty of licensed cars from Audi, Bentley, BMW, Dodge, McLaren, and more, all upgradable with boosts like turbo, nitrous injection, and body tweaks. One of the game's best features is its control scheme, whereby a steering wheel is projected on your screen, manipulated with intuitive motions and offering a display for speed, gear, and rpm.

CSR Racing definitely isn't the first of its kind, but it has impressive polish, a nice control scheme, and a very appealing price tag – free! 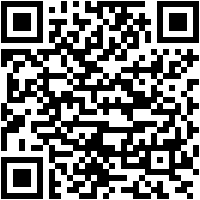 Pursuing a "new puzzle experience," the Room came to the Play Store last month with beautiful graphics, intriguing puzzles, and thoughtfully intuitive touch controls (the only question you need ask yourself to grasp the controls is how would I touch/turn/open this in real life?).

For a hidden-object game, the Room is undeniably polished, and lovers of brain teasing puzzles will be delighted. It'll cost you $1.99, but if you love mystery, puzzles, and gorgeous visuals, it's worth it.

Now, turning to a game that is – at the moment, anyway – exclusively listed on the Amazon App Store, we have Scribblenauts Remix. The game, which made the jump to Android last month, brings with it the adjective-and-noun-choosing experience you'd expect.

Remix invites players to help Maxwell acquire an object called the Starite by solving a variety of puzzles. In doing so, the player will bring to life various objects according to their selection of adjectives and nouns.

The game, as expected, has an adorable art style, and at $0.99 from Amazon can hardly be resisted.

While the shiny, slick racing action of CSR is great, there are few who could resist the allure of a good old-fashioned RC race. Re-VOLT brings its similarly-named 1990's console counterpart to Android with sparks, electricity, and fourteen race tracks that will take you through a "friendly neighborhood" in a race for radio-controlled glory.

The game's got 42 cars to choose from, easy touch controls, and five gameplay modes covering everything from time trials to stunt arena to championship or single race modes with up to twelve players. 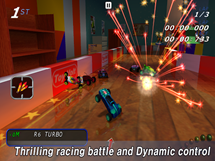 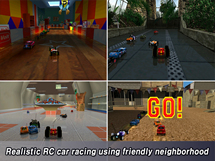 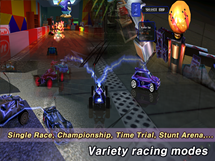 At $4.99, Re-VOLT is no steal, but it's a great game and well worth the price if you want to depart from the usual high-gloss racing game experience. 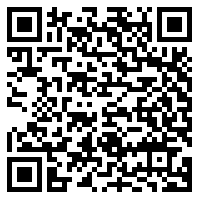 Hazard Rush is a game with a simple concept and the neon allure of Geometry Wars. The general premise in all of its three game modes is to outrun the enemy, periodically killing off a few combatant ships by collecting glowing circles.

For the cost of $0.00, players can enjoy the game's "Rush" mode, and with a one-time IAP, Endless and Pacifism modes become available. Rush is a two-minute spree, Endless never ends, and in Pacifism mode, the enemy ships just sort of bounce around in no particular pattern, while your strength diminishes until you pick up a green plus sign to buy yourself more time.

Even if you're a die-hard IAP hater, Hazard Rush is worth downloading for Rush Mode alone – I promise you'll want to unlock the other two. Blendoku is really interesting. It's got a truly unique concept, executed in as simple a manner as possible, but it's still challenging. The general idea is this: drag and drop colored squares onto a grid. You've got to fill the whole grid, but the colors have to progress from beginning to end in a logical manner. In the tutorial stages, things start simple – just arrange various shades of gray. Things quickly get harder though.

The game's only real flaw is that ads sometimes overlap the top of the interface on a phone. Any in-app purchase will remove the ads though, so this is a rather small complaint. Other than that, the game is great, and definitely worth downloading. 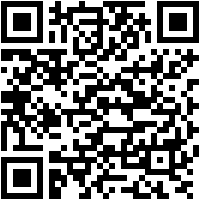 Our next game in the list is actually a sequel. Tiniti Interactive Ltd., following up on Crazy Knight, introduced Tiny Legends: Heroes to the Play Store last month, giving (adorable) dungeon crawling a shake.

Players can manage a party of up to three heroes, engaging with enemies using a simple swipe motion, or healing friends with another swipe. Elsewhere, the game is largely what you'd expect from a dungeon crawler – special skills, attacks, leveling up, and about seventy levels. Where the game really shines is its cute-and-blocky yet thoughtful visual style.

Yes, there are in-app purchases, but they are at least palatable in Heroes. Considering the download is free, it's worth a shot. Speaking of adorable art styles, our list wraps up with Nimble Quest. A pixel-filled wonder from the creators of Tiny Tower (Nimblebit LLC), Nimble Quest invites players to "lead a conga line of heroes to glory against hoards of enemies." And really that's exactly what you'll do in the game. A retinue of heroes from knights to wizards, lead by you, will march through each stage collecting gems and defeating foes. In his coverage, Ryan had it right when he compared the game to the perennial cell phone classic Snake.

If cute, pixelated heroes and a fast-paced, action-packed game of snake sounds right up your alley, hit the widget for the free download. 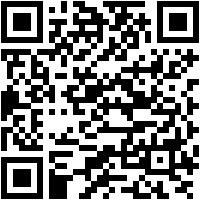 April, just like every month, had tons of new games to choose from. Hopefully our shortlist has saved you a little time and money in selecting which games will fill the entertainment gap on your device. If not, don't worry – we've still got our longer periodical roundups, and we'll be back again next month with another short list.